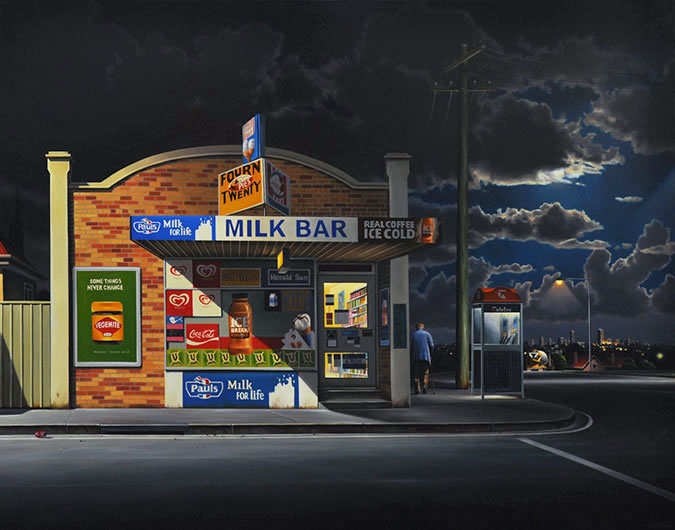 Peter Smets' new body of work again accents the consequences of progress and technological change upon the landscape and its inhabitants. Carefully researched source material has been meticulously reconstructed in the studio where significant imagery was lifted out of its original context and presented as aesthetic phenomena. The sense of actual place is ambiguous but we inevitably feel a familiarity. Although cultural, environmental and economic interests are implicit, the paintings have an extraordinary psychological presence and metaphorical relevance.

The powerful impact of the images owes much to Smets' profound understanding of formal composition. He composes with light and shadow as readily as space and form. 'Capturing light is everything!' he stresses. 'I'm fascinated with its illusive quality and fleeting magic.' In the painting Milk Bar, strong light streams from an undisclosed source and is manipulated for dramatic effect. It falls obliquely over half of a shopfront; the other side is enveloped in deep shadow signifying impending redundancy. Allegory is implicit in the imagery. The solitary figure of an elderly gentleman has ‘rounded the corner' and passes by a seldom-used telephone booth. In the distance beyond, a cement truck hurtles towards a sprawling metropolis that glimmers under roiling, moon-tinged clouds.

A similar ambience pervades the Corner Shop work. Here another man well past his prime hobbles past a corner, his grey presence replicated as a shadow on the wall. The figure's subdued bearing contrasts markedly with the abundant colour and shapes of the shop's facade and interior. Selection and location of details are crucially important. Every element that Smets employs is strategically positioned to produce specific visual responses. The bright red of the mailbox geometrically aligns with certain shop signage. Further directional prompting occurs where the white line across the road's surface leads the eye up from the foreground and into the crux of the scene.

The Phone Booth painting also depicts an increasingly outmoded entity. Isolated in a flat, featureless landscape, light spills from the booth illuminating just a few clumps of remaining greenery. Clouds massing overhead obscure the moon. The atmosphere is strangely still - the inevitable only temporarily deferred. Obscured in darkness, the road curving towards the city skyline augurs no reprieve.

Other paintings continue the theme of obsolescence with imagery of antiquated parking meters that are set in expansive, vacant carparks. Red expiry notices are meaningfully overt! Perhaps as an embodiment of such, the recurring motif of the old man is again present - his back turned from the ‘new technology' world. He is now so tiny in the scheme of things as to be almost indiscernible. Twilight has fallen and a curious hush suffuses the sites. The mood of these paintings is facilitated by Smets' mastery of perspective. Illusions of deep space are created through diminishing size relationships and variances in colour intensity. Darkening clouds softly parallel the starker angles of the parking meters and roadways that lead ever towards the omnipotent city. In the Parking Lot work a close-up rendition of a parking meter dominates the canvas. It is quite a surprise to detect in the positioning and shapes of the machine's construction the semblance of an android head atop a neck-like pole!

Smets' paintings resonate as consummate visual documents of material progress and its ramifications. In them we witness a perfect reconciliation of pictorial forces that underscore the hyperrealism and pertinence of the narrative. 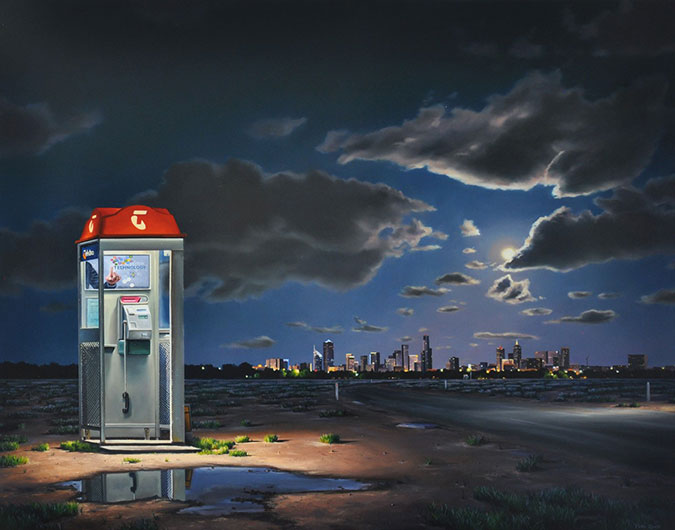 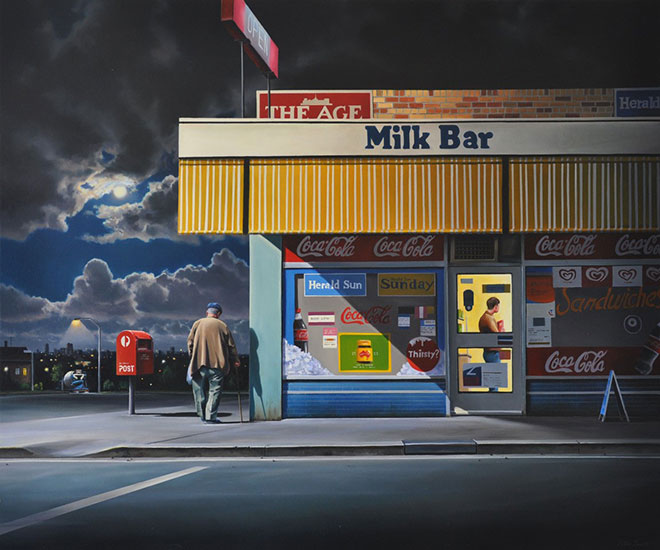 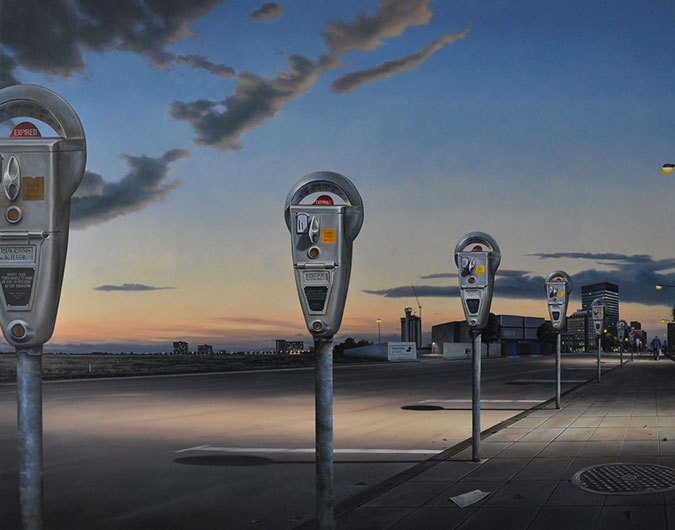 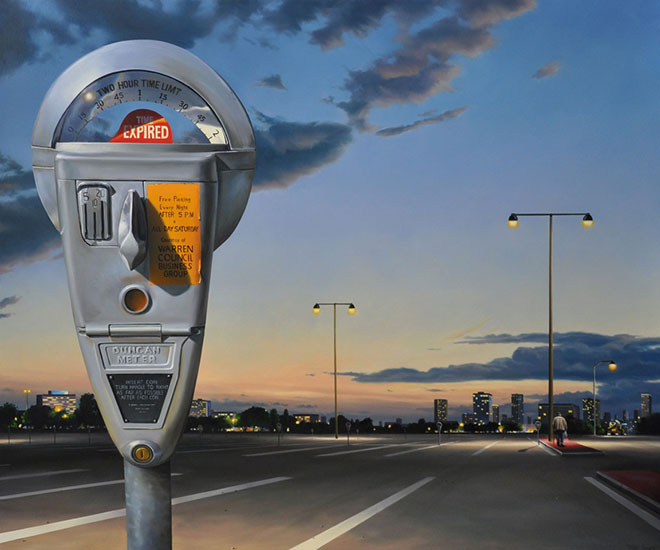 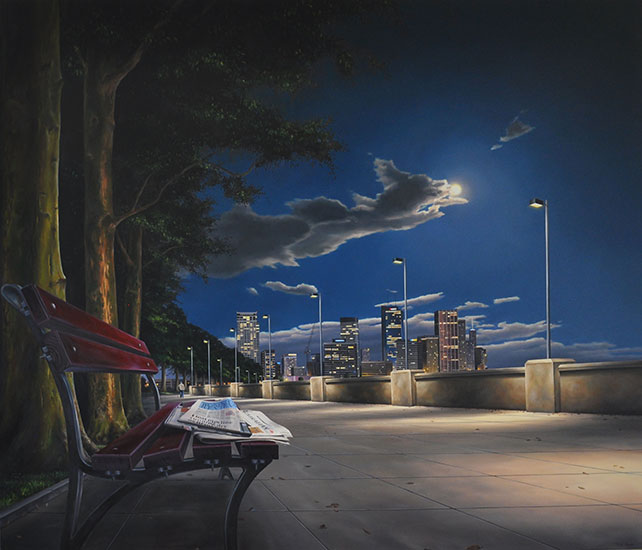 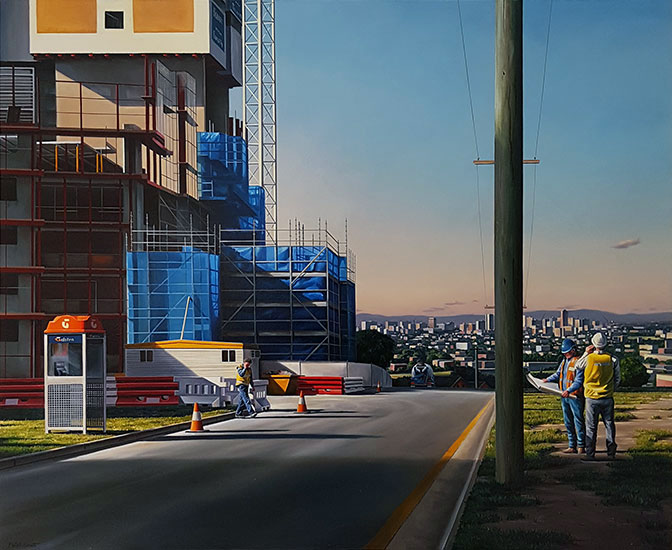 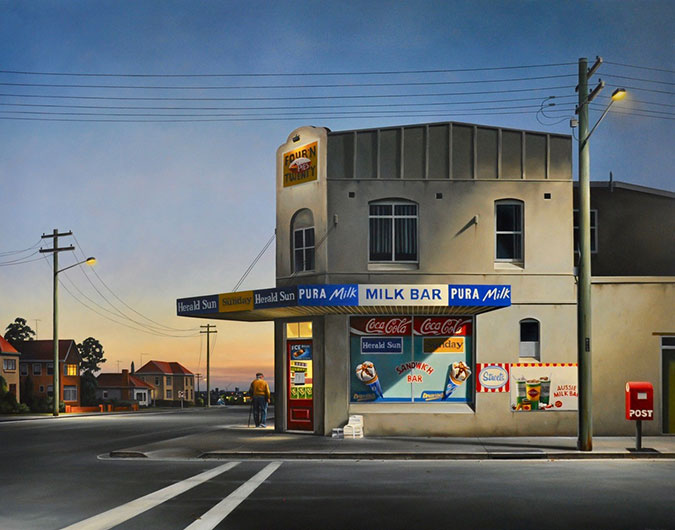