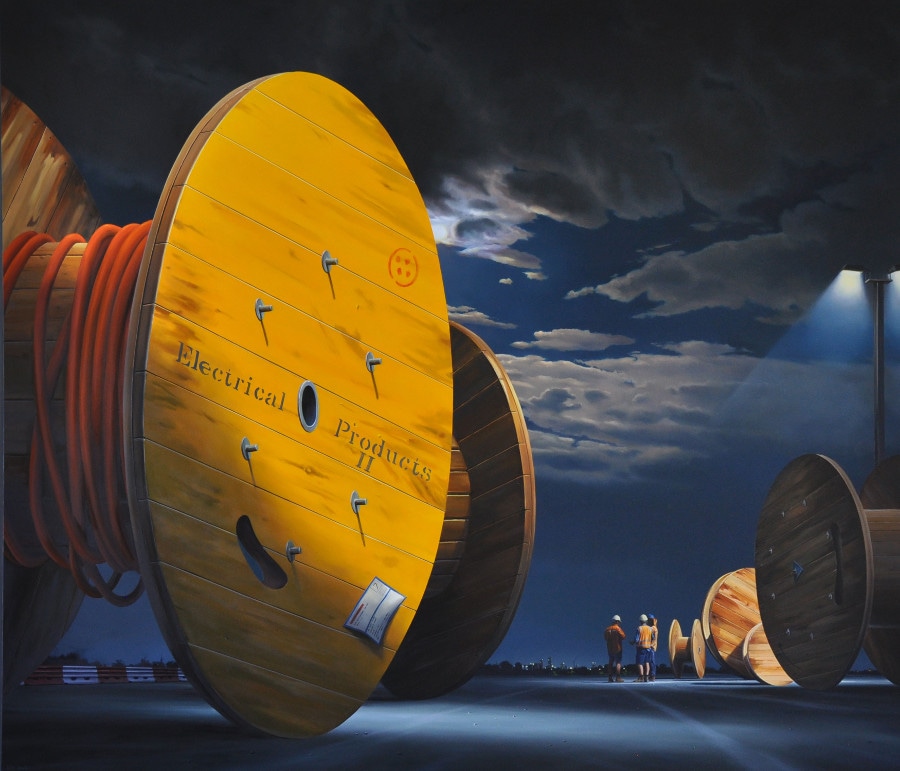 Moon-silvered clouds drift through the immensity of inky night skies. Far below, moonlighting activities are unfolding with astounding realism. The paintings in Peter Smets' latest body of work further explore how light variations transform the appearance of landscape. A grey, overcast day offers no definition and for Smets, light and the shadows cast in its absence are of prime importance. "Light is like blood running through the veins, it makes a work live. Without light, a painting is dead," he says.

Night time offers a different dimension of visual experience. It is a quieter, altogether less familiar world. In almost every one of the new works a full moon glimmers. The strange quality of its reflected light has prompted arcane associations throughout the ages. Both wisdom and irrationality have been attributed to the powerful force thought to emanate from a full moon. It is a dichotomy mirrored in the exhibition.

The contrast between works depicting a gentle fading of what was and those that chronicle an energetic surge towards the future is overt. Human figures, sinisterly grey cement trucks, conga lines of cable reels, expansive tarmacs, roads and leaf-littered pathways are ever heading towards the twinkling horizon of that future. Smets leaves it up to the viewer to interpret the implication of the gigantic red warning in the painting Right Way.

More than the pale glow of moonlight is required for the chiaroscuro Smets employs to create the illusion of depth and volume on a two dimensional surface. The glare of industrial spotlights and street lamps is needed to dispel the darkness of night and illuminate his narratives. Sense of place is always ambiguous and invariably the figures are devoid of emotional engagement with their surrounds. The paintings depicting an old man either sitting, head bowed and reading a newspaper, or hobbling away - walking stick in hand - are commentaries on the ageing population and the fact that progress is always conducted by new generations eager for change.

Cable reels are a recurring motif. These oversized drum-shaped objects carry the electrical wires necessary for any construction enterprise. Smets' enormous reels symbolically dominate the foreground but he tells that he has also chosen them for formal, pictorial reasons. They are spatial inventions that present vibrant colour opportunities against the predominantly cool, blue tones of the backgrounds; their great circular shapes complimenting vertical structures and the horizontality of distant skylines.

A meticulous technician, Smets' realism is beyond any mere imitation of appearance. Although cultural and environmental interests are implicit, his paintings essentially manifest a quest for consummate composition and geometric purity. Every element has been measured, weighed and balanced to produce specific aesthetic responses. However dramatic and poignant the subject matter may be, it remains the vehicle for the expression of abstract principles. 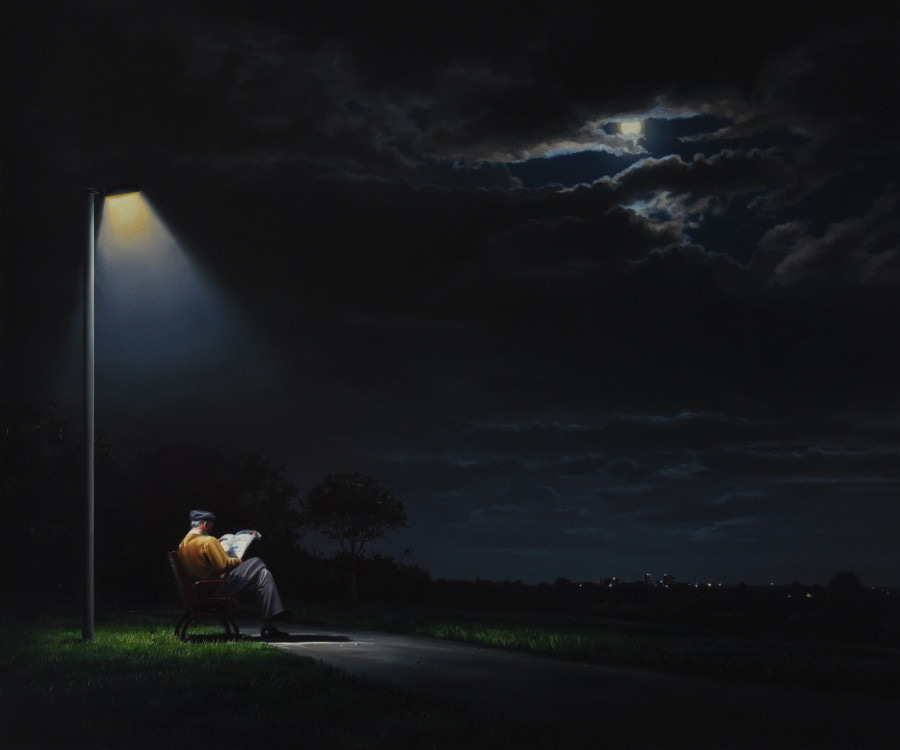 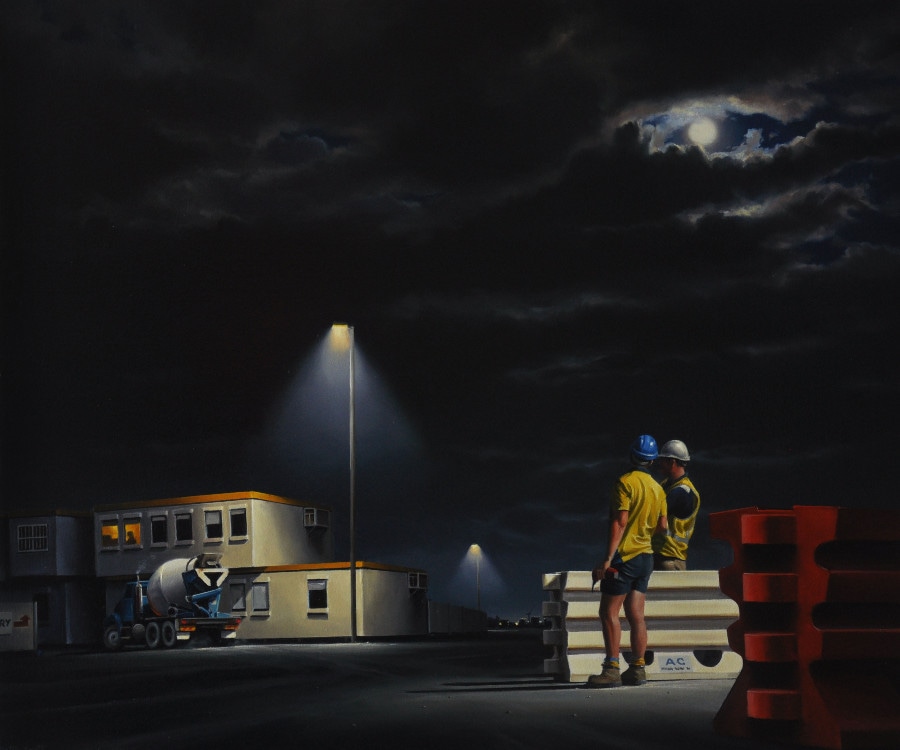 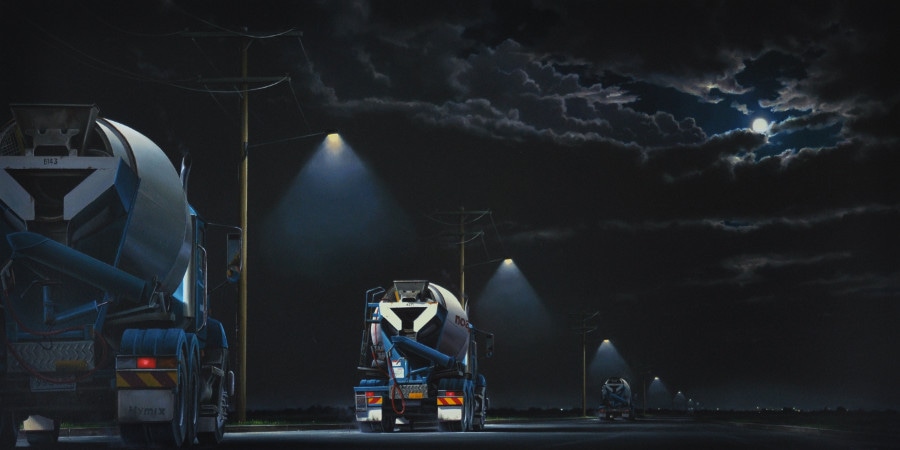 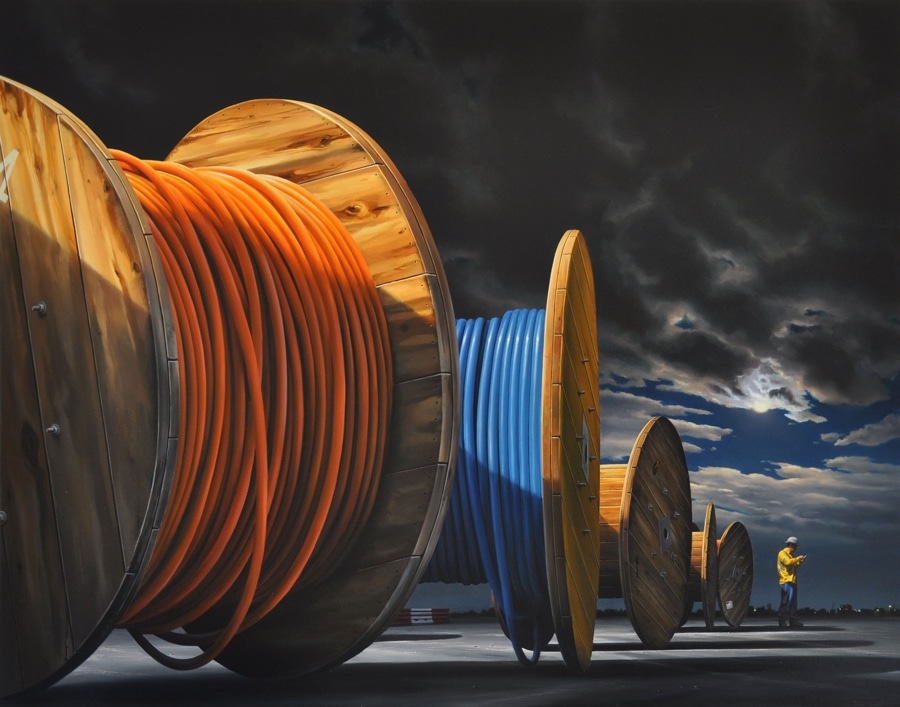 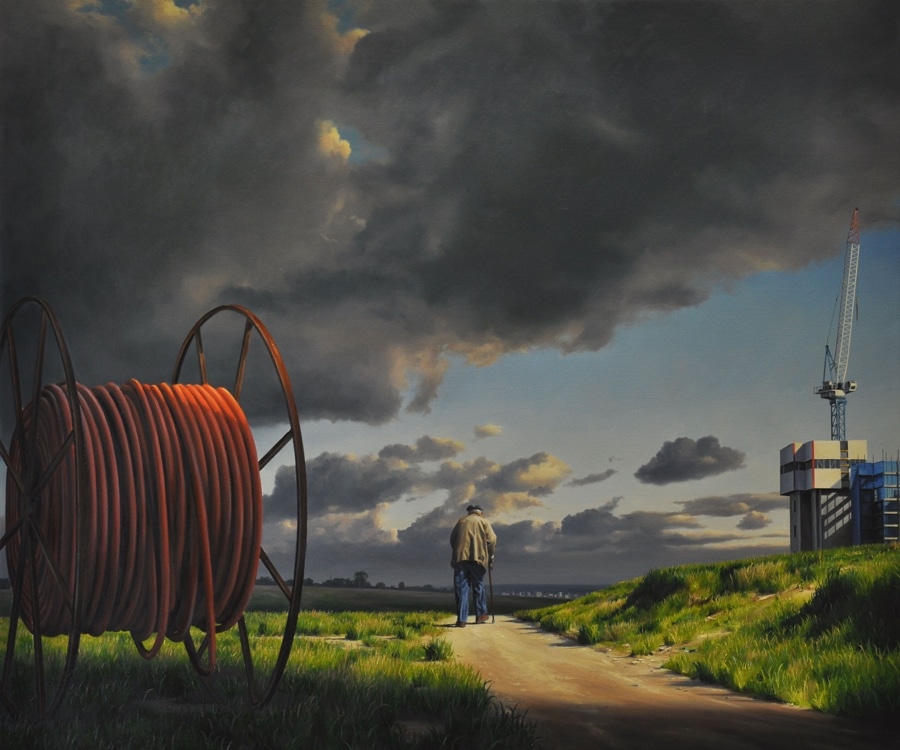 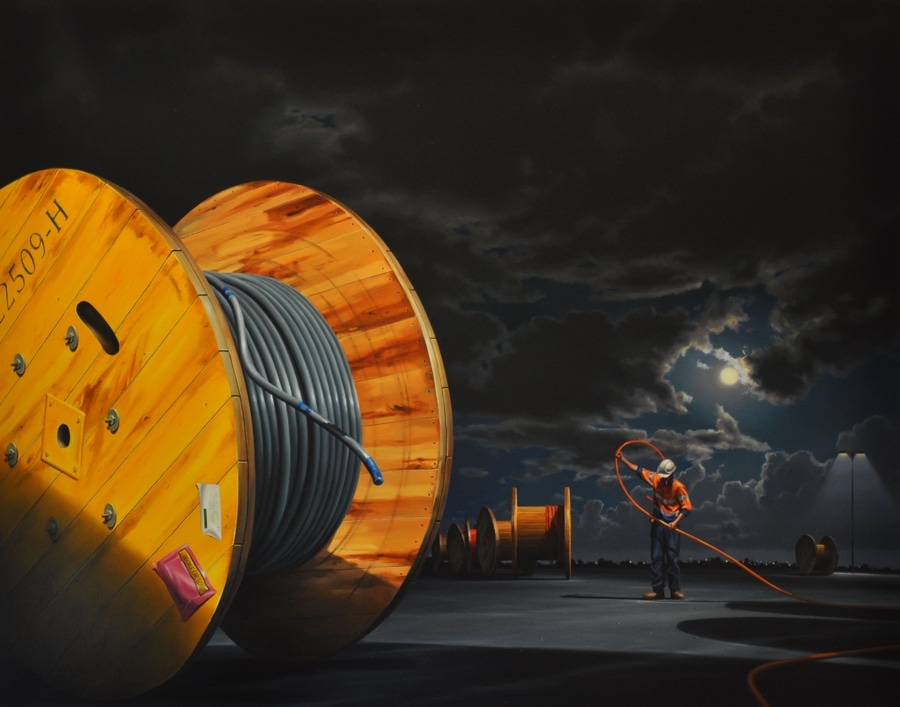 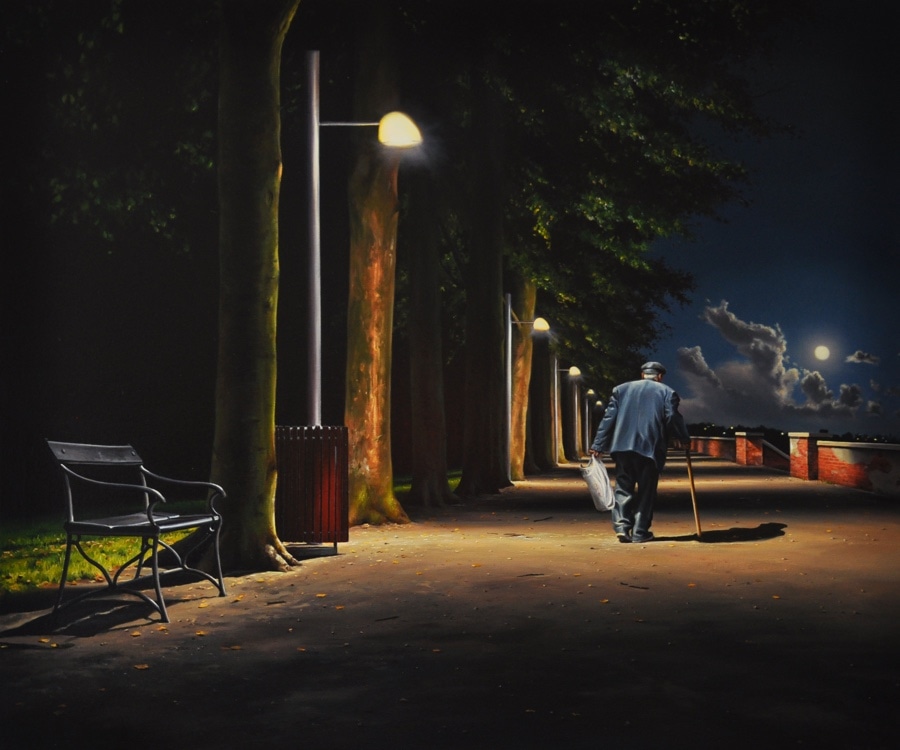 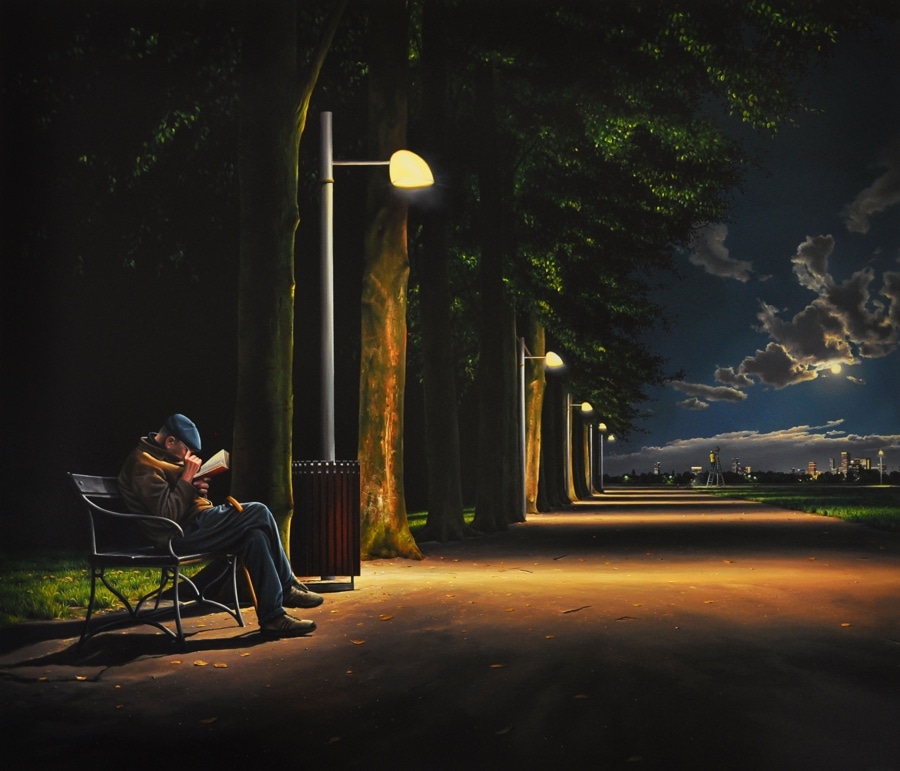 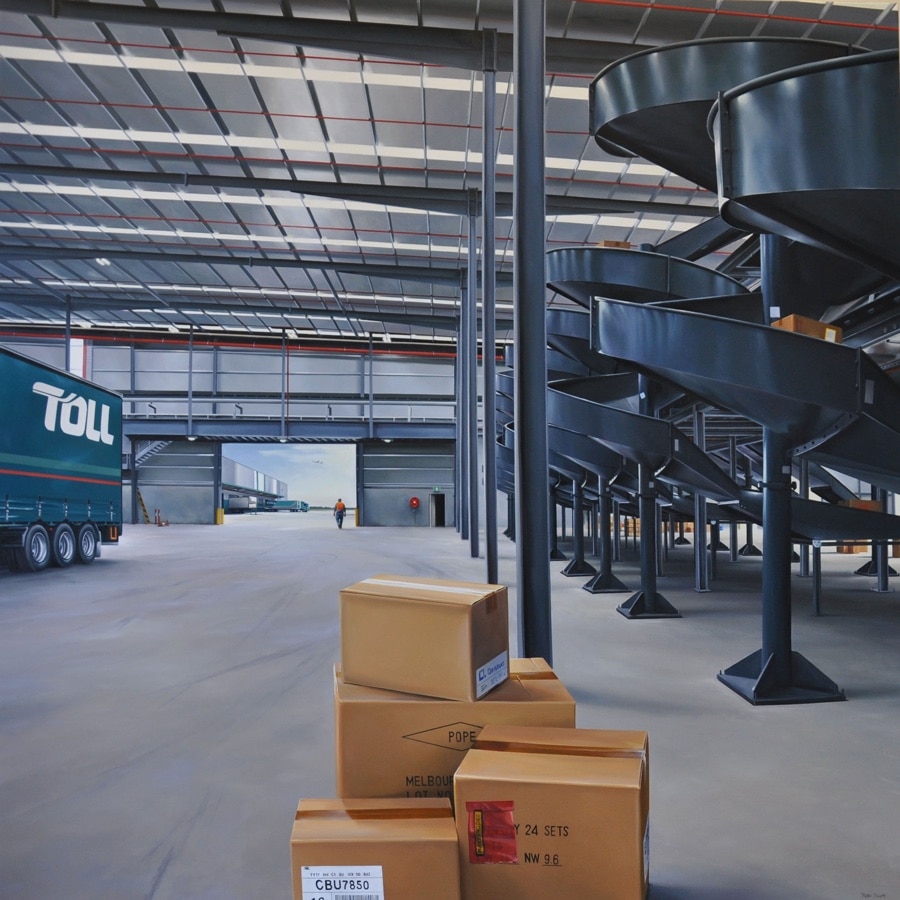