It is impossible not to become absorbed in the refined detail and mood of a Peter Smets' painting. Never a mere recorder of visual facts, he deconstructs our habitual ways of seeing. With consummate skill, he persuades us that the contemporary world of industry and technology offers unexpected opportunities for aesthetic musings. Although the imagery in Smets' new body of work revisits the construction sites that define his oeuvre, he tells that his interest is currently focused on the men who work there, albeit they are for the most part depicted in quiet moments of respite.

The sense of actual place is always ambiguous. The individual objects and people depicted have originally been sourced from various building sites or chance roadside encounters and then carefully recomposed in the studio to promote narrative intrigue. The powerful impact of the final images owes as much to his profound understanding of formal composition as to his 'in field' sketches and photographs.

It is not so much the actual objects that matter most, but their placement and how light reveals them. Smets composes with light and shadow as readily as space and form. It streams from sometimes indefinite sources and is manipulated for dramatic effect. The way light falls on objects and the shadows cast by its absence are of prime importance.

The men who inhabit these new canvases are generally huddled in small groups, backs turned from the gigantic machines they operate or the wrapped edifices under construction. By their varied postures and reflective attitudes, Smets is seeking to evoke the humanness of those who are employed in such an industry. To amplify this objective, his illuminated figures assume an even greater lucidity against inky expanses. Nightfall presents a very different dimension of experience. Under moon-silvered clouds it is a quieter, altogether less familiar world. It is a time conducive to introspection and the sharing of thoughts.

For Smets, objects also function as symbols. Dominating the foreground in several works, machines exude a curious perfection and their incongruously massive size transmits an eerie, almost animate presence. Plunging from the sky, the 'neck' of a gigantic yellow excavator has all the appearance of some prehistoric monster chomping into an unsavoury mound of gravel.

Other works again feature the figure of a solitary old man who has ‘turned the corner' on a hankering for new discoveries and the pursuit of progress. His is now a world of meditative quietude. New generations, eager for change, will perpetuate the strivings for material advancement.

Apart from the atmospheric realism, the key to our fascination with Smets' paintings resides in the genius of his pictorial organisation. However dramatic and poignant the subject matter may be, it remains the vehicle for the expression of abstract principles. A meticulous technician, every shape, line and colour that he employs has been strategically positioned to produce specific visual responses and compositional fulfilment. Smets has transformed the motifs of technology and progress into visual poetry. Although cultural and environmental interests are implicit, his narratives are never overt but have a restrained subtlety that allows the viewer's imagination to invest the picture. 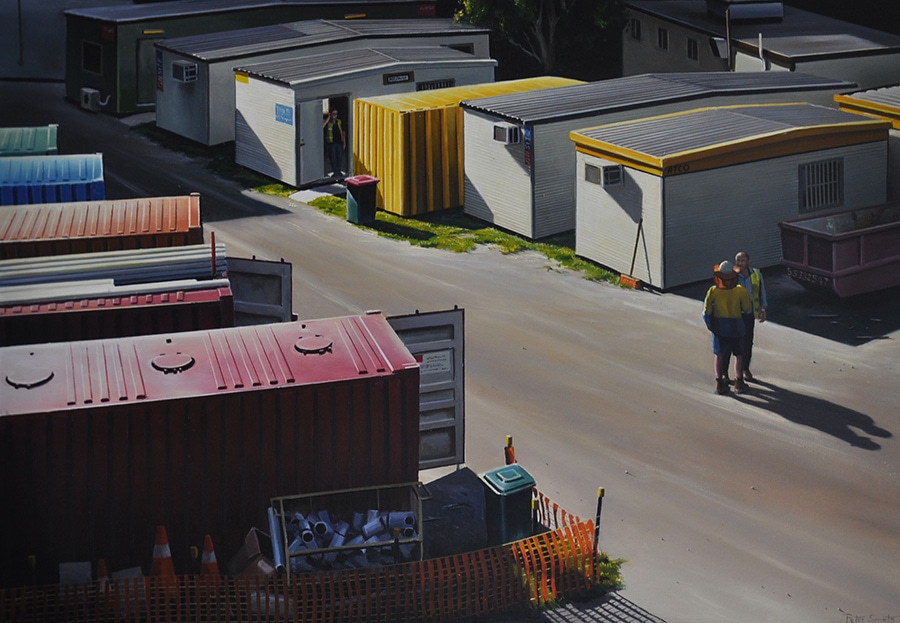 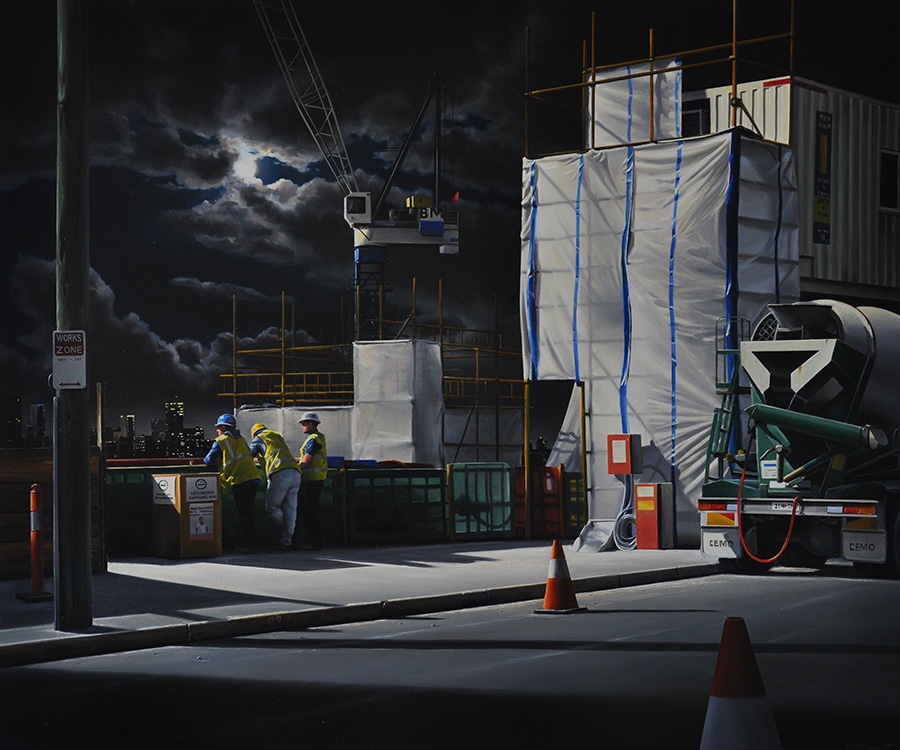 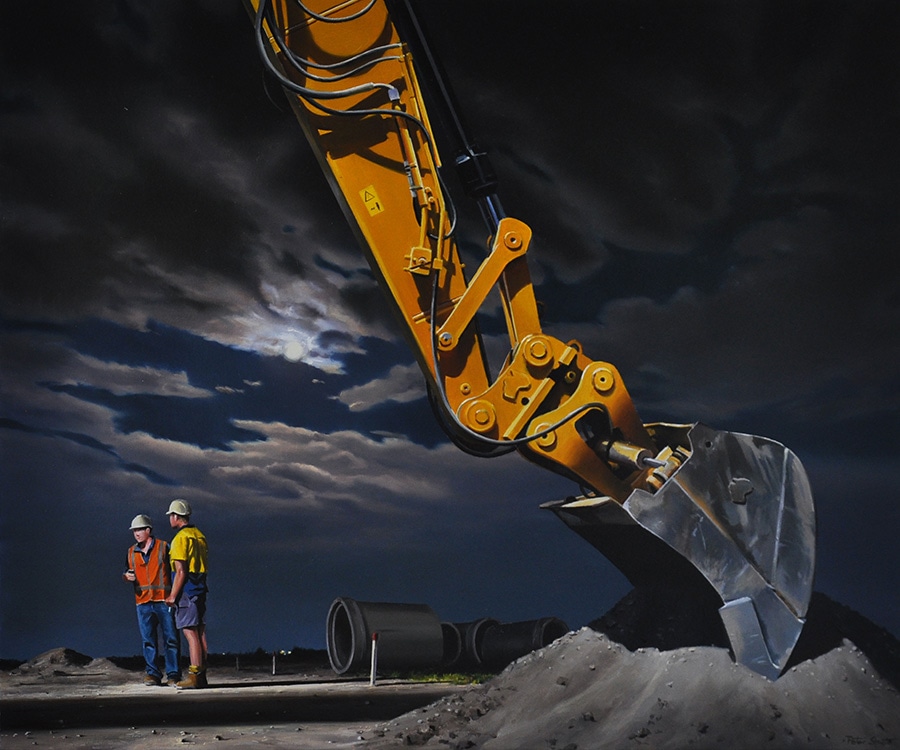 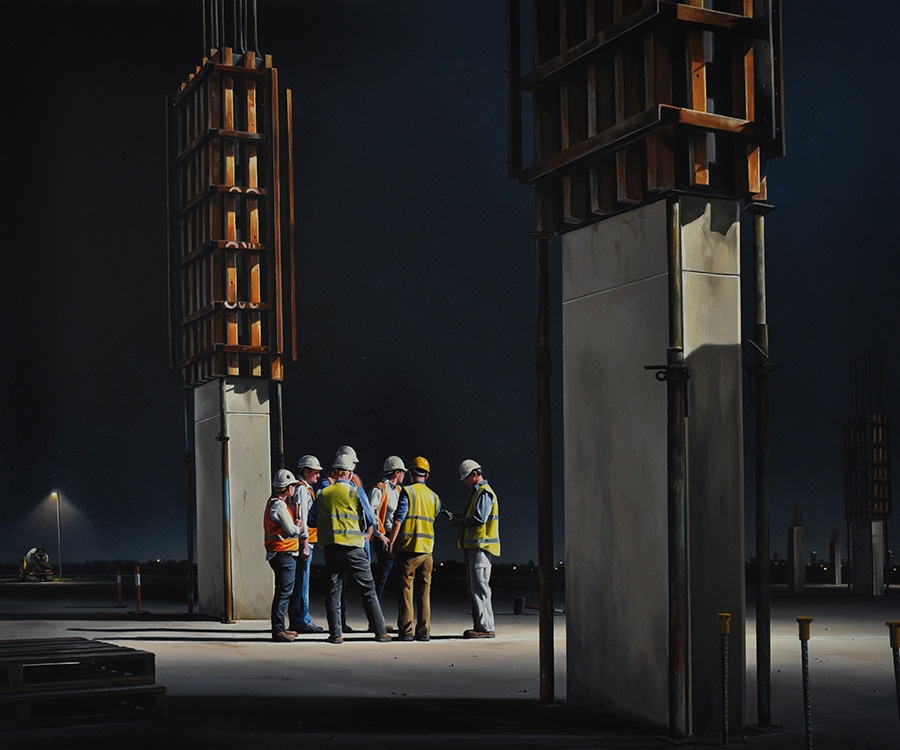 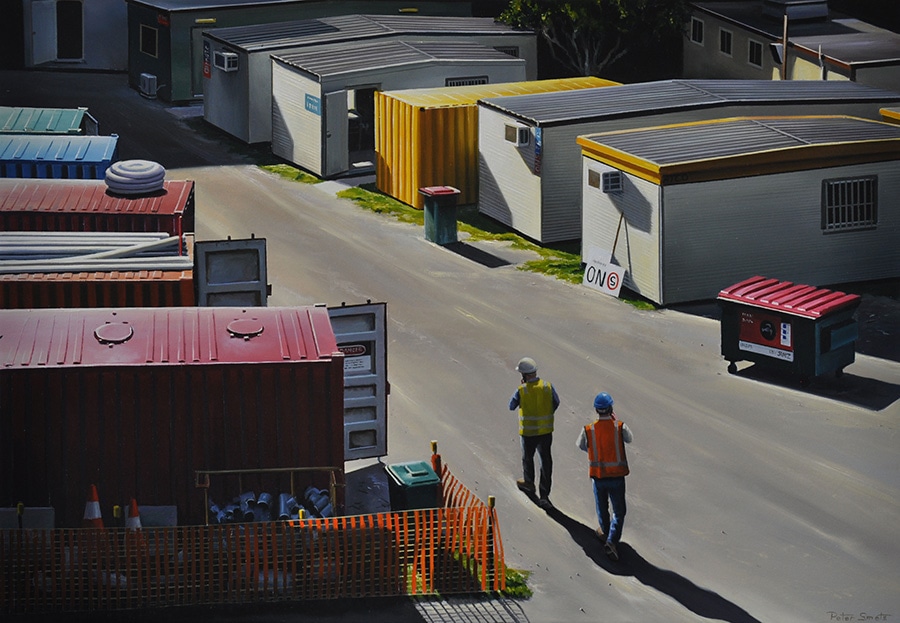 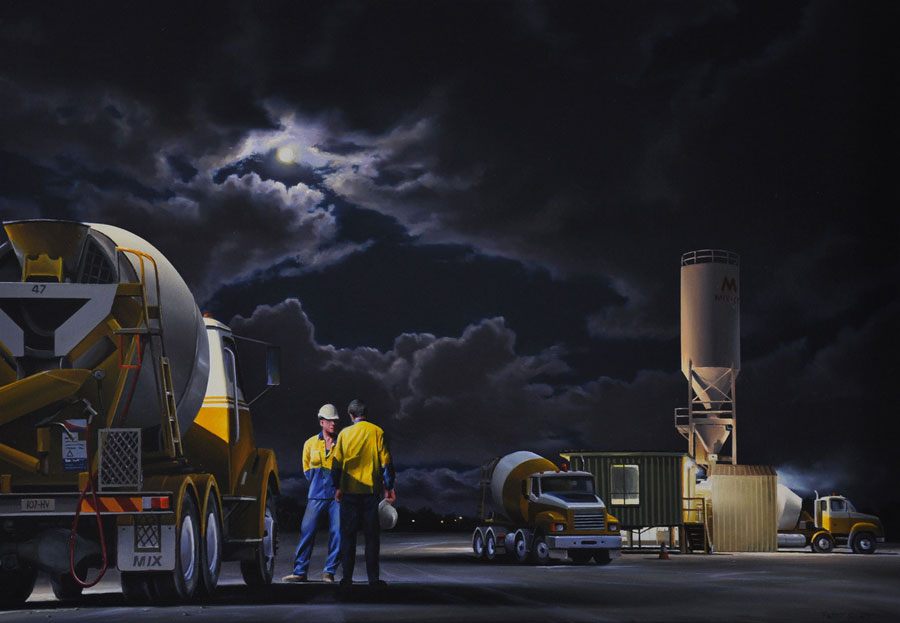 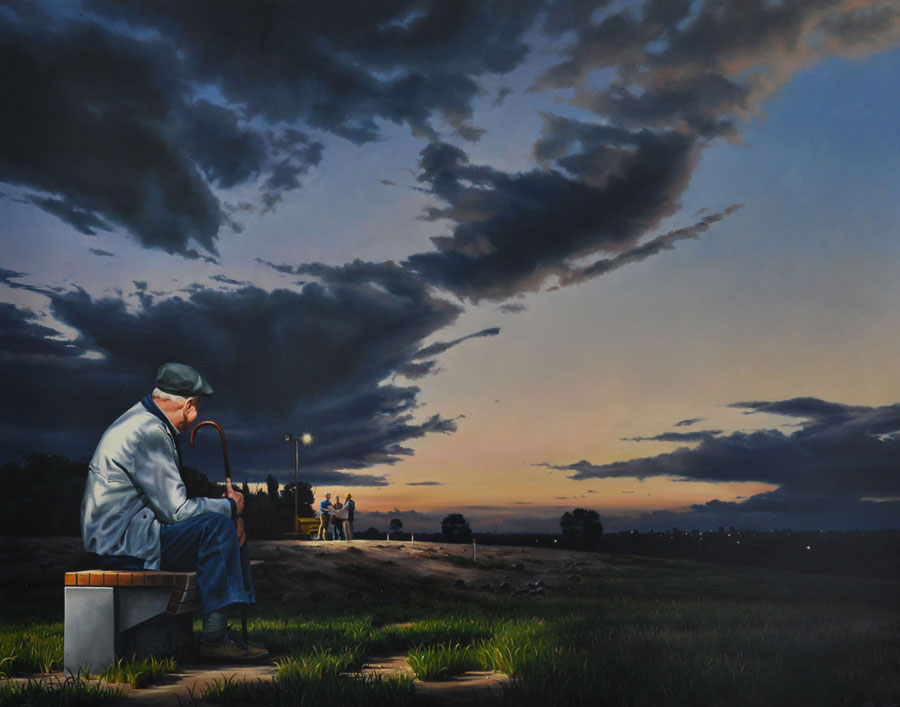 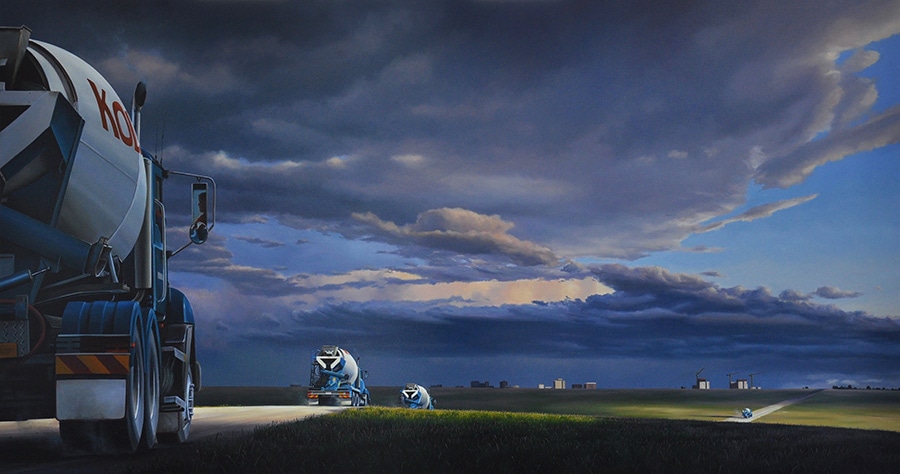 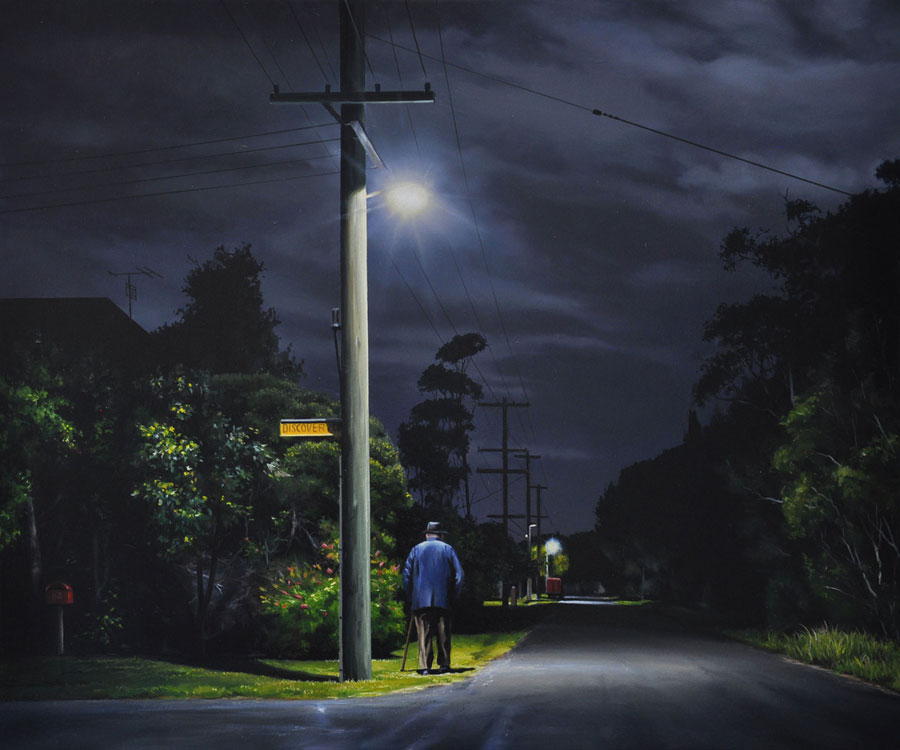 Around the Corner
50x60cm
SOLD 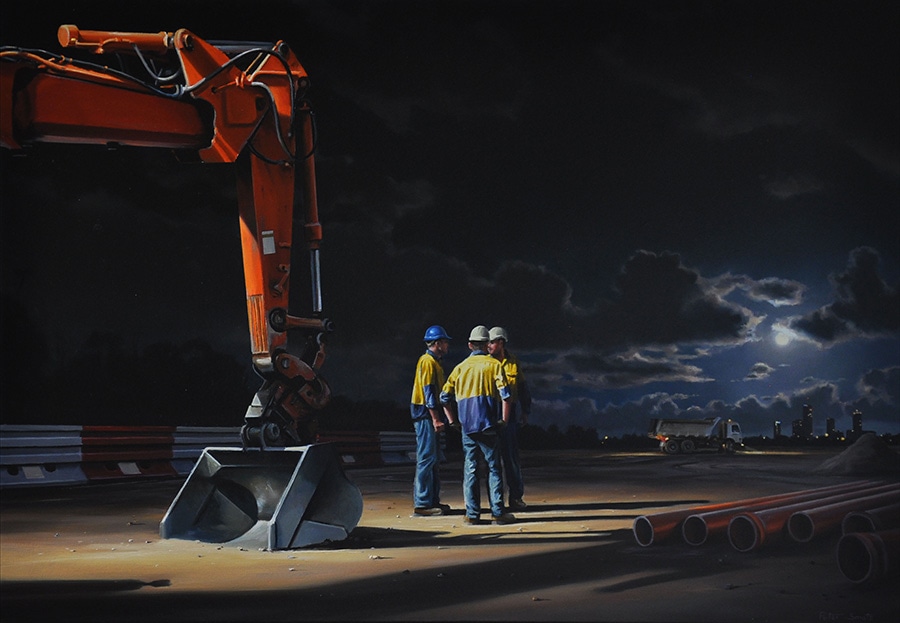