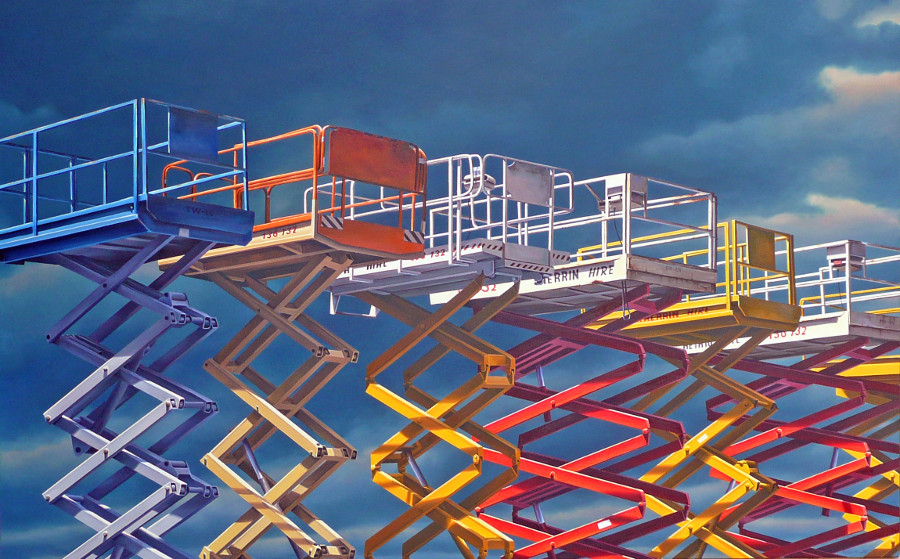 "I am fascinated with the never ending development of the city - the view you cannot miss wherever you go. I see the tools of construction as works of art in themselves."

"The beautiful may be encountered under the most diverse aspects. As soon as it is found there it belongs to art, or rather, to the artist who knows how to see it there." – Gustave Courbet, 1861

The words of Courbet resonate in the paintings of Peter Smets. Born in the Netherlands but a Gold Coast resident for the past 19 years, Smets finds inspiration in the processes of urbanization:

I am fascinated with the never ending development of the city - the view you cannot miss wherever you go. I see the tools of construction as works of art in themselves.

The title for the exhibition, Men at Work - Constructions, operates as both narrative and strategy. A regular visitor to various building sites, Smets is in the habit of "scanning the general activity to see what catches the eye." Back in the studio he meticulously reconstructs his source material to create works of astounding realism. The powerful impact of the final images owes as much to his profound understanding of formal composition as to his ‘in field’ sketches and photographs.

Intriguing juxtapositions between the natural and the man-made give 'edge' with surreal undertones. The pictures are essentially still and a curious serenity prevails. They may well be about the activity of building, but all work has halted. The tiny figures of the workmen appear nonchalant - at ease with their surroundings. A mixture of indifference and acceptance, their casual poses defy the harsh immensity of the machines and constructions which envelope them.

This sense of incongruous calm is well demonstrated in the painting, Blue Concrete Bucket. It positively palpitates with latent menace. Like some mediaeval catapult, the blemished, cold blue metal is poised ominously against a cloudless, pristine blue sky. Ponderous with its load of cement, we imagine that a resumption of motion might swing the contraption into collision course with a sprouting 'high-rise'. Lifeless and as fragile as a house of cards, the structure seems beckoning to be knocked down.

In the work Recycle, a jumble of massed cardboard boxes lies discarded in the late afternoon light: their particular arrangement drawing the viewer into the scene. There is no easy grasp of the picture's content and allure. The shapes are perhaps best read as abstract compositional elements. The diagonal clouds conspire to lead one’s eye into the shadowed void of the top-most, gaping box. The sloping surfaces of the foreground cartons offer escape and so we slide down but not out of the picture-plane. The vertical of the light pole pulls us up again and we cross back, but now behind the boxes, with the briskly walking man. Intent on his mobile phone conversation he is oblivious to our machinations. Aesthetic attention is sustained in the very clever triangular dynamic of the red sticker, yellow tape and blue 'valvoline' lettering.

Beyond the prodigious technical precision and the cultural implications of the constructed world he portrays, Peter Smets' images invite further contemplation. In them we sense the slippage between civic and private reality - that interface where the personal touches on the universal. 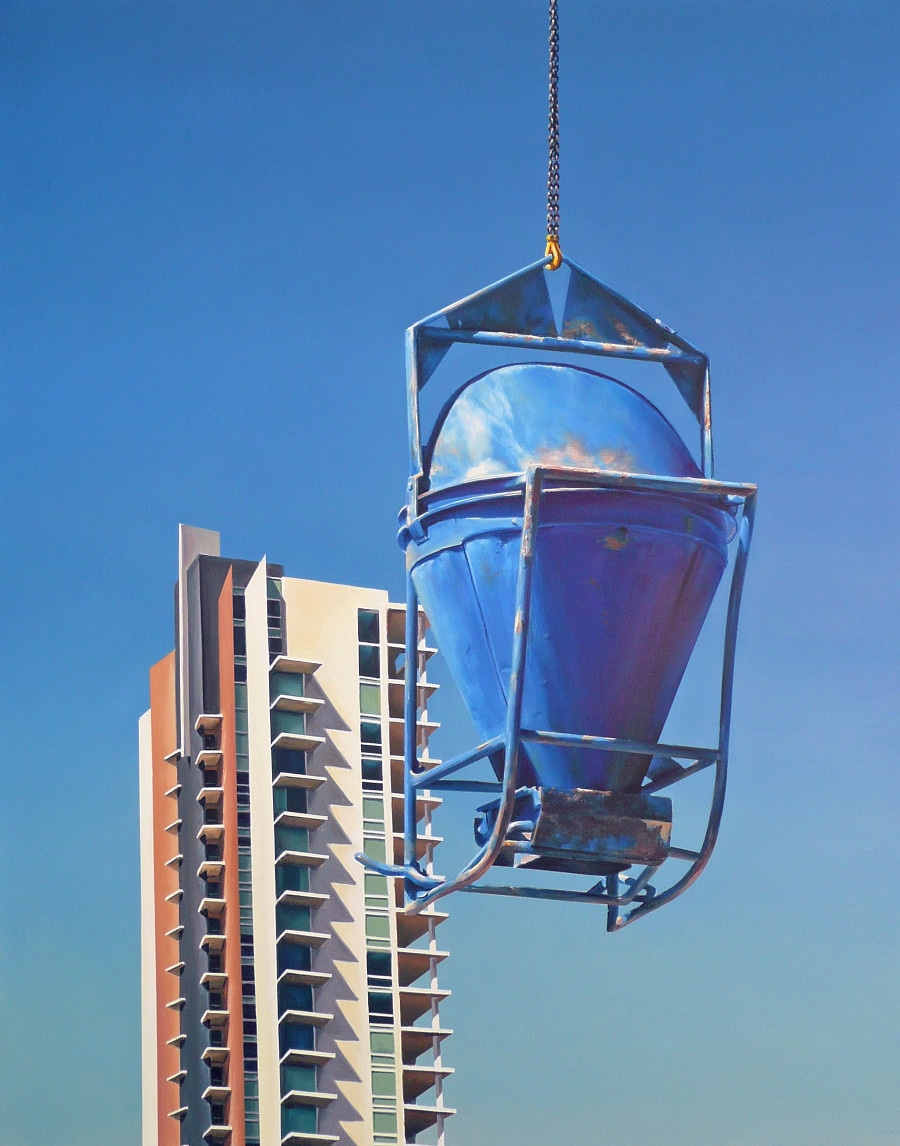 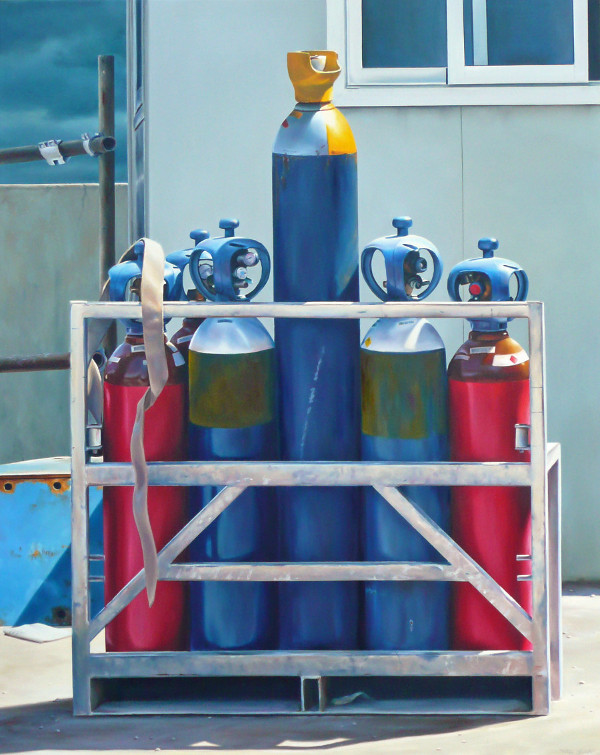 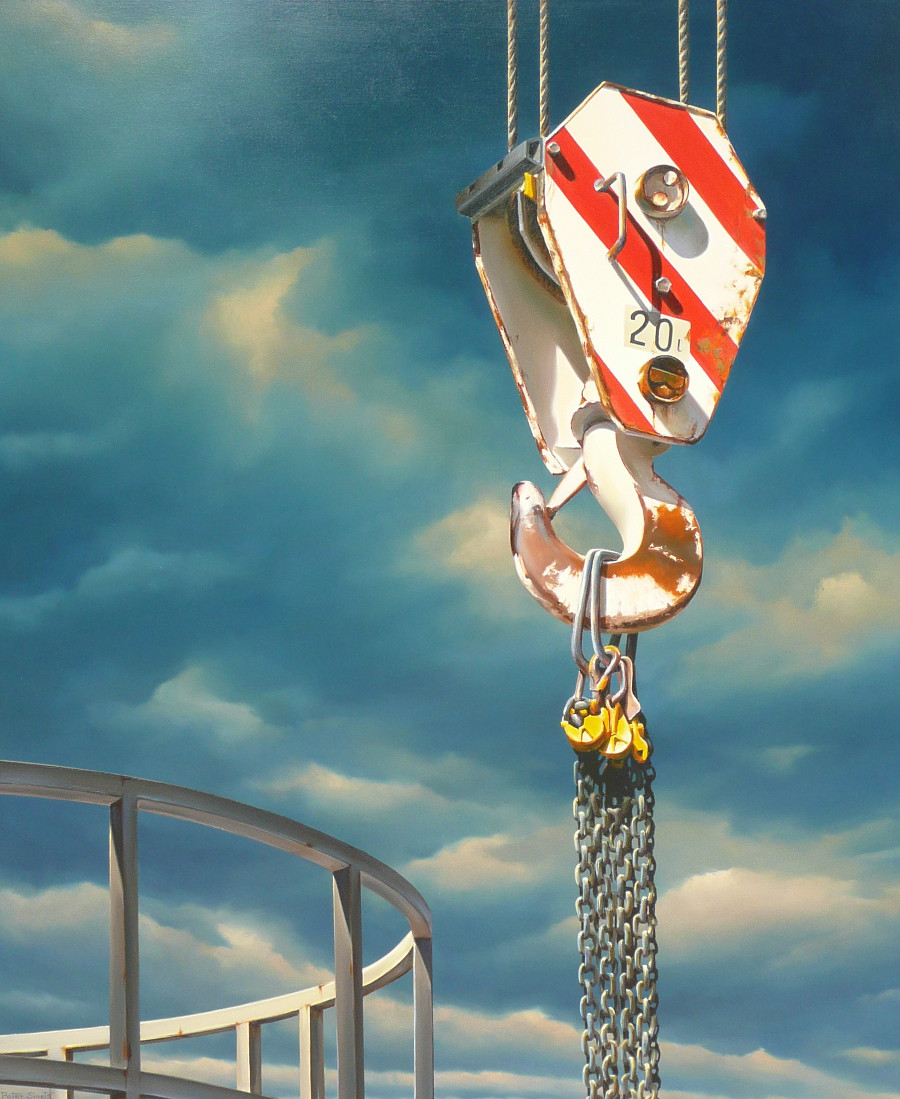 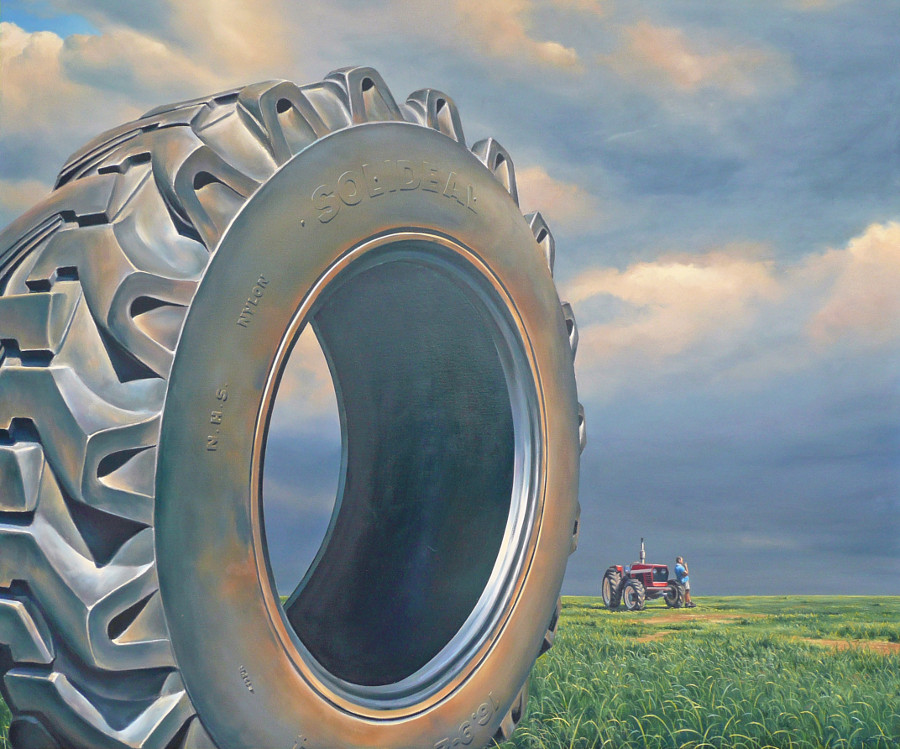 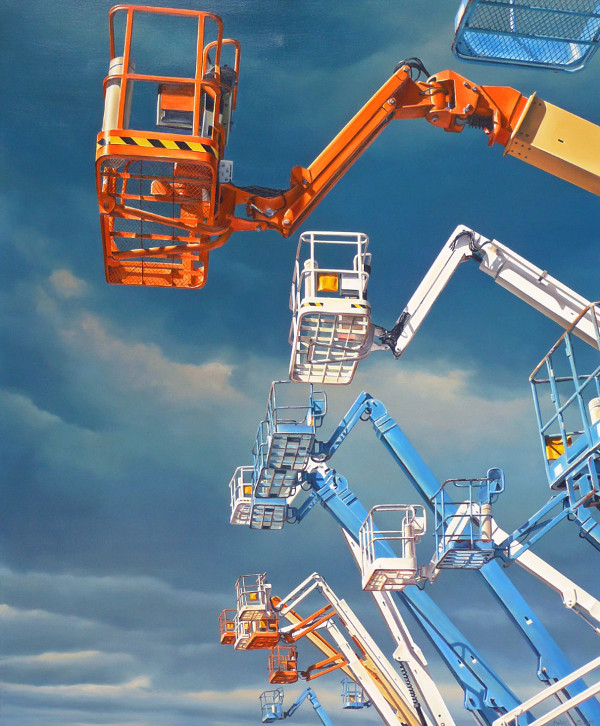 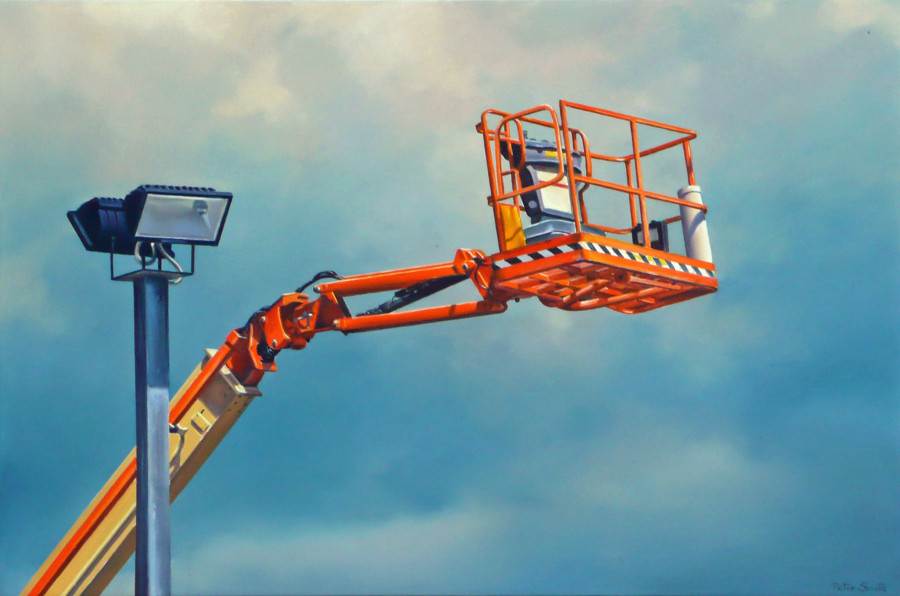 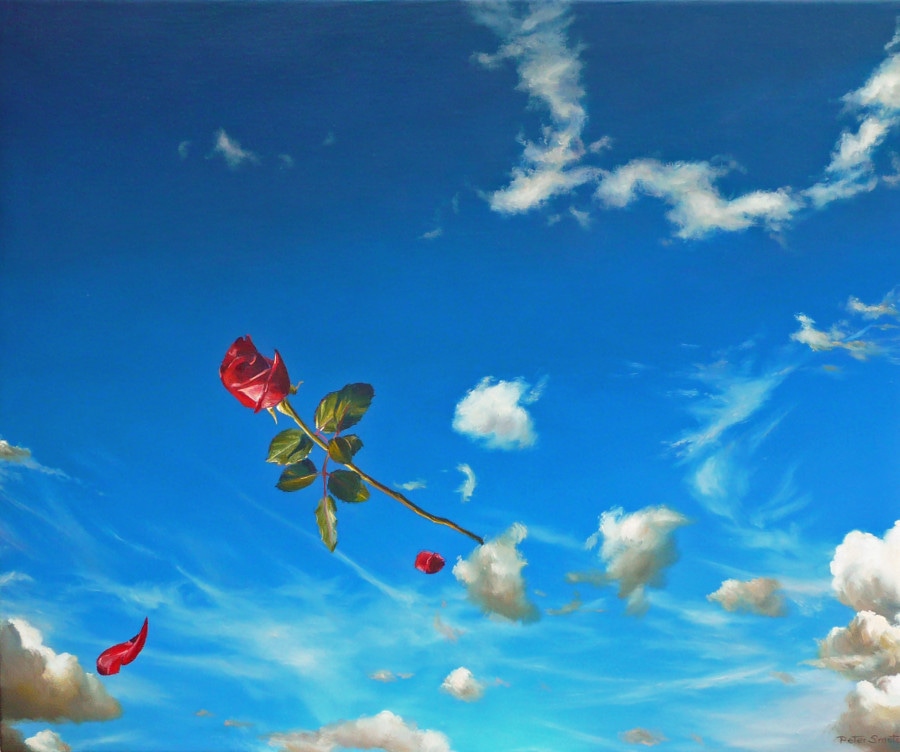 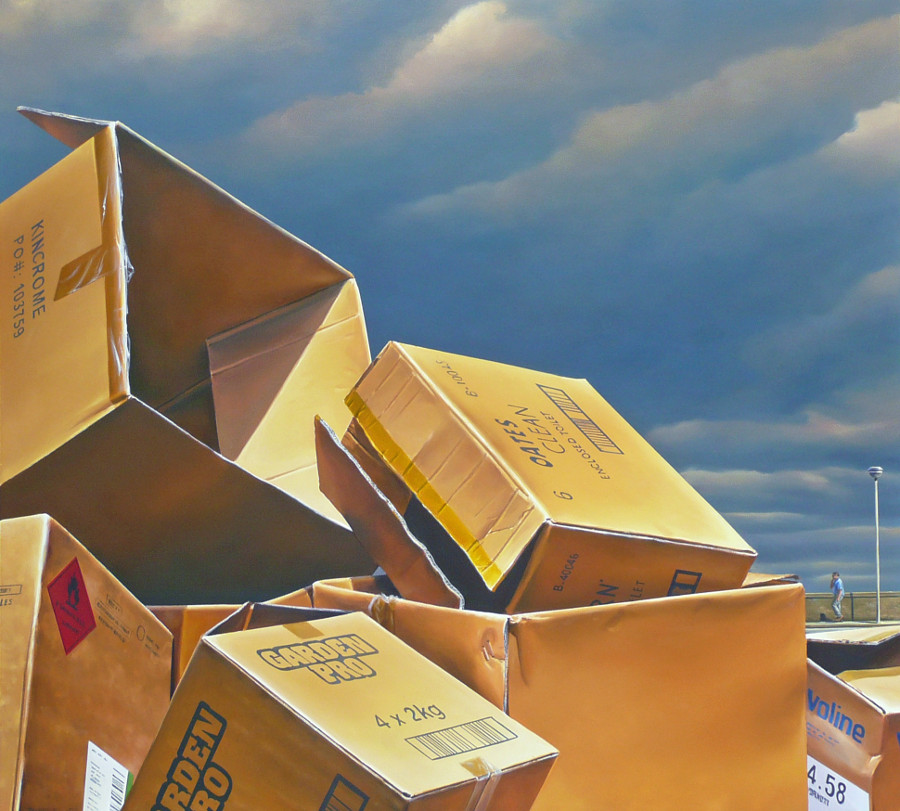 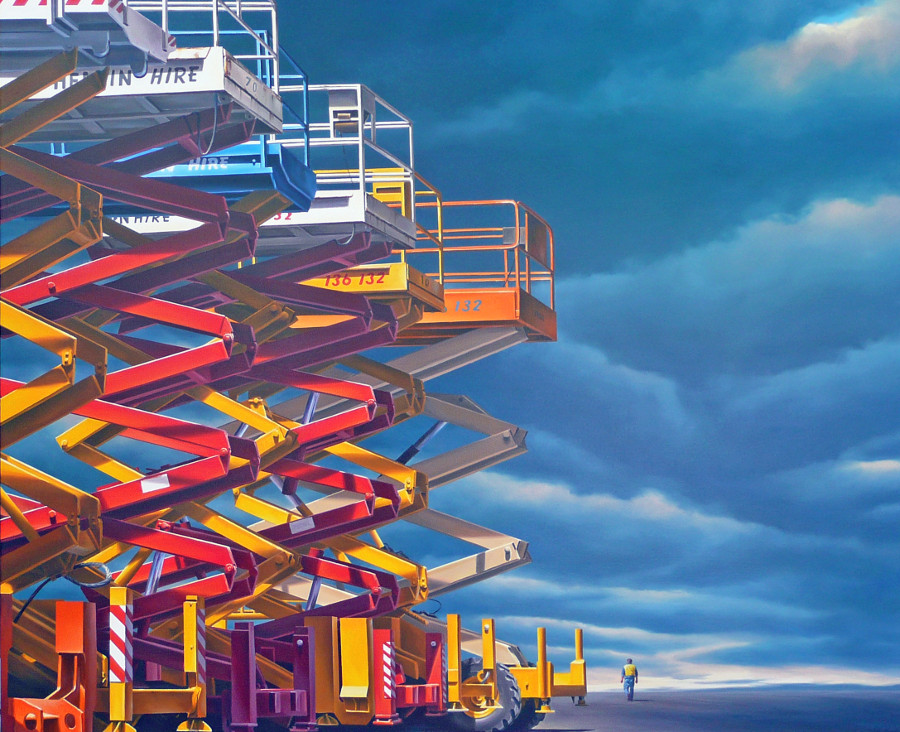 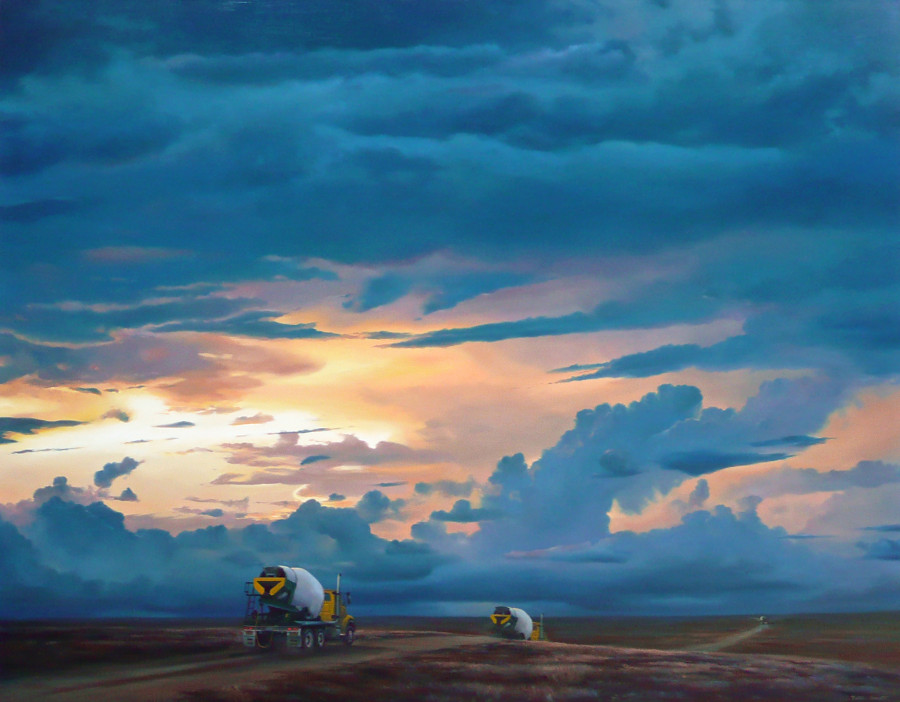 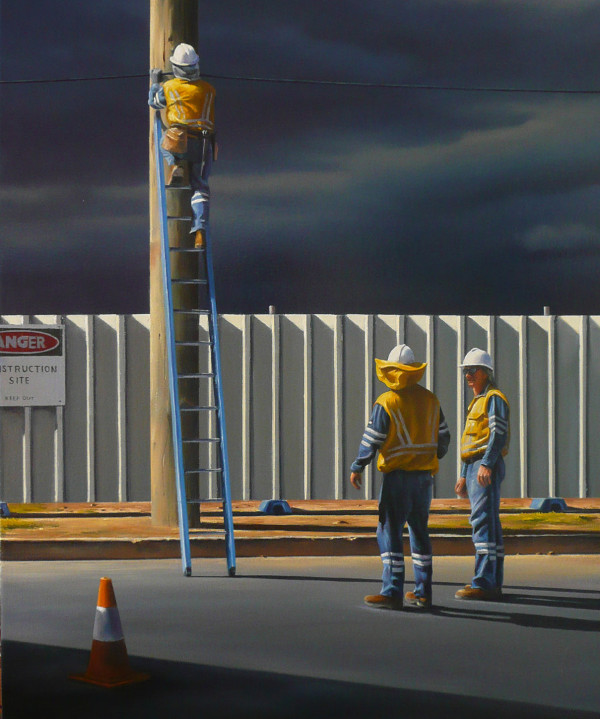 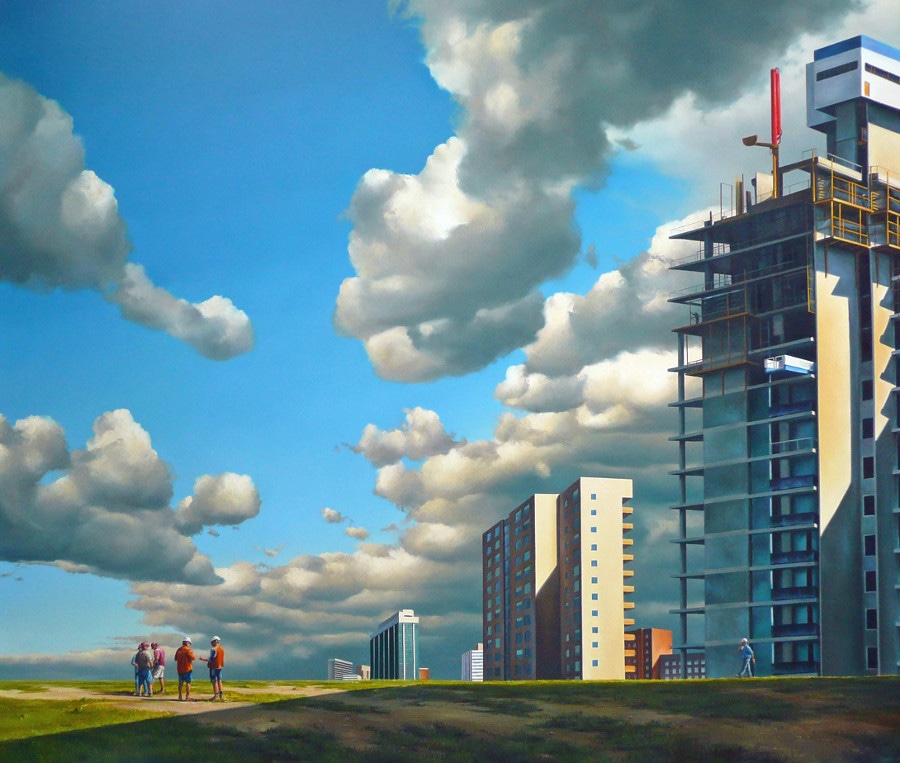 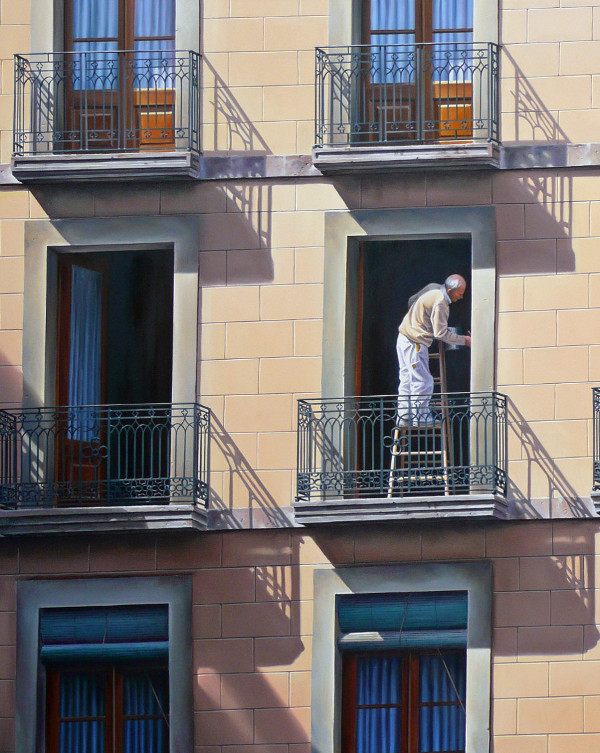 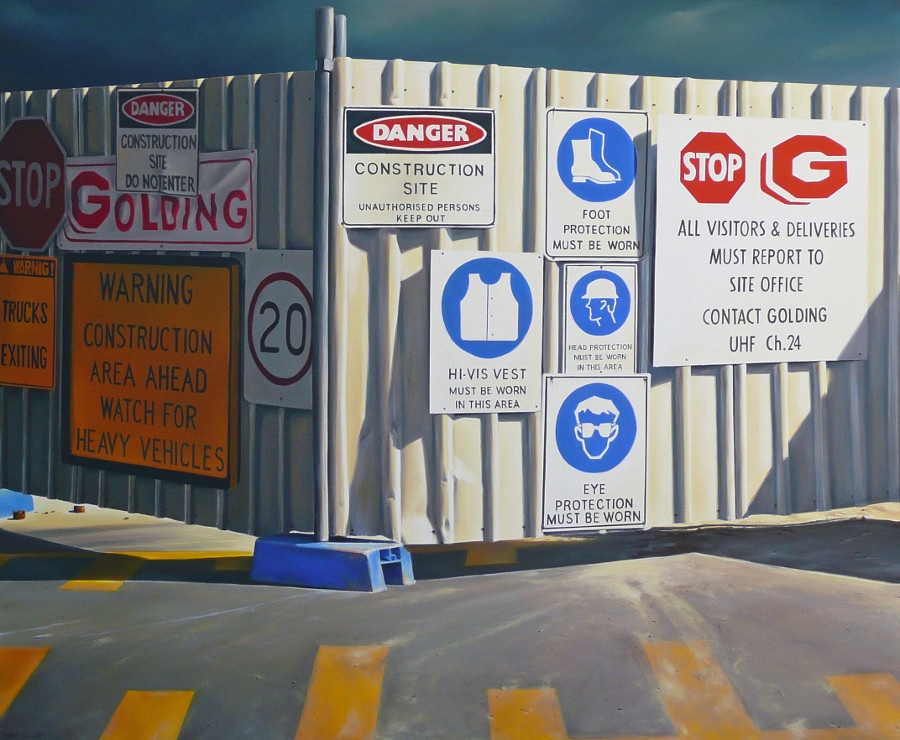