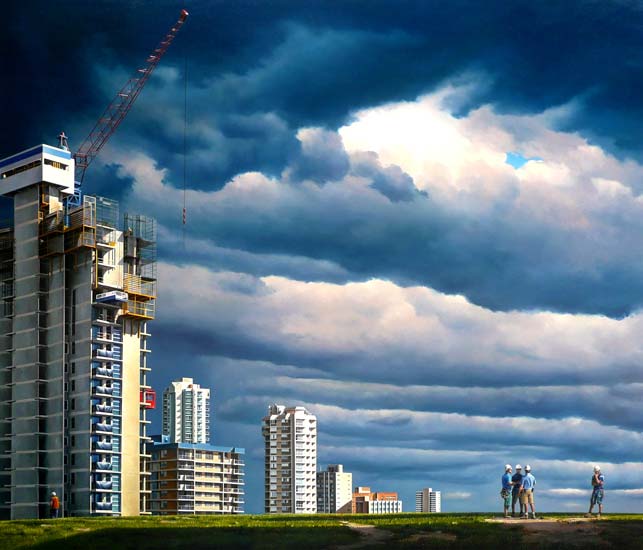 "I am fascinated with the never ending development of the city - the view you cannot miss wherever you go. I see the tools of construction as works of art in themselves."

A finalist in last year's Sulman and Wynne art prizes at the AGNSW, the technical virtuosity of Peter Smets' technique is undeniable. Although his work is often compared to that of Jeffrey Smart, the paintings are not the product of any imitation. Both subject and methodology stem instead from Smets' astute engagement with his local environment, and an impeccable training in the classical traditions of the great European Masters at Holland's Maastricht School of Art. Netherlands-born, Peter Smets has lived on the Gold Coast for the past 20 years and has witnessed first-hand its transformation as one of Australia's fastest growing cities. He constantly draws inspiration from the processes of that relentless urbanization.

The title for his current exhibition, Constructive Viewpoints, operates as both narrative and strategy. A regular visitor to various building sites, Smets is in the habit of "scanning the general activity to see what catches the eye." Back in the studio he meticulously reconstructs his source material to create works of astounding realism. The powerful impact of the final images owes as much to his profound understanding of formal composition as to his 'in field' sketches and photographs.

Peter Smets is however, never a simple recorder of visual facts. He deconstructs our habitual ways of seeing, showing us objects so well known that they are not well seen and beauty where we did not expect to find it. Intriguing juxtapositions between the natural and the man-made worlds create edgy, almost surreal undertones. Contrary to the actual noise and activity usually associated with building projects, a curious stillness imbues these scenes. In the painting Site Meeting, all work has halted and an eerie, brooding calm pervades. Large and exquisitely crafted, it is impossible not to become absorbed in the detail and mood of the picture. A moving pageant of billowing clouds casts deep shadows and areas of intense light over the earth and the constructions rising from it. The unfathomable, random power of nature seems to be very much at odds with the rigid objectivity of mankind's ambitions.

Beyond the prodigious technical precision and the cultural implications of his constructed landscapes, Peter Smets' images invite further contemplation. The small figures of workmen give the pictures a human dimension and provide narrative context, but they are also essential components in the overall design of the works. Every shape, line and colour that Smets employs is strategically positioned to produce specific visual responses and compositional fulfilment.

Smets' concern for object placement and spatial relationships is perhaps best exemplified in the painting Lifting. It reads as pure abstraction. Against the backdrop of a vividly blue cloudless sky, the formal qualities of balance, rhythm and proportion are at play. Devoid of human presence and emotive associations, the work operates as a dynamic equilibrium of geometric forms. Initially the viewer's eye follows the oblique lines of the cable wires and the crane's zig-zag braces to the top of the painting, intuitively seeking the apex of the triangle they form. Masterfully, Smets' redirects our attention back into the work by way of the hoist's brilliant yellow hue and thence down to the enormous concrete mould dangling ponderously from its chains. The painting’s dramatic climax would culminate there at the base of the painting if it were not for further directional promptings. The red of the heavy concrete load makes a subtle connection with the small, red cable-reel slanting down towards it, and so the optical cycle begins anew in a work where pictorial energies have deposed the subject.

Given his exceptional aesthetic rigour and the integrity of his practice, Peter Smets' career path shines brightly indeed. In the years to come when current fads and trends have receded into obscurity, Smets' works will continue to resonate as consummate visual documents of our devoutly material age. 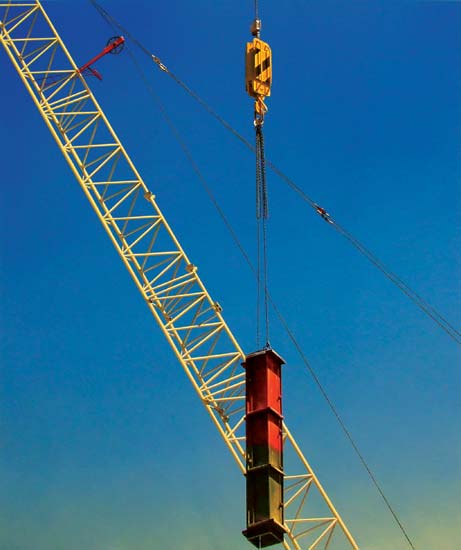 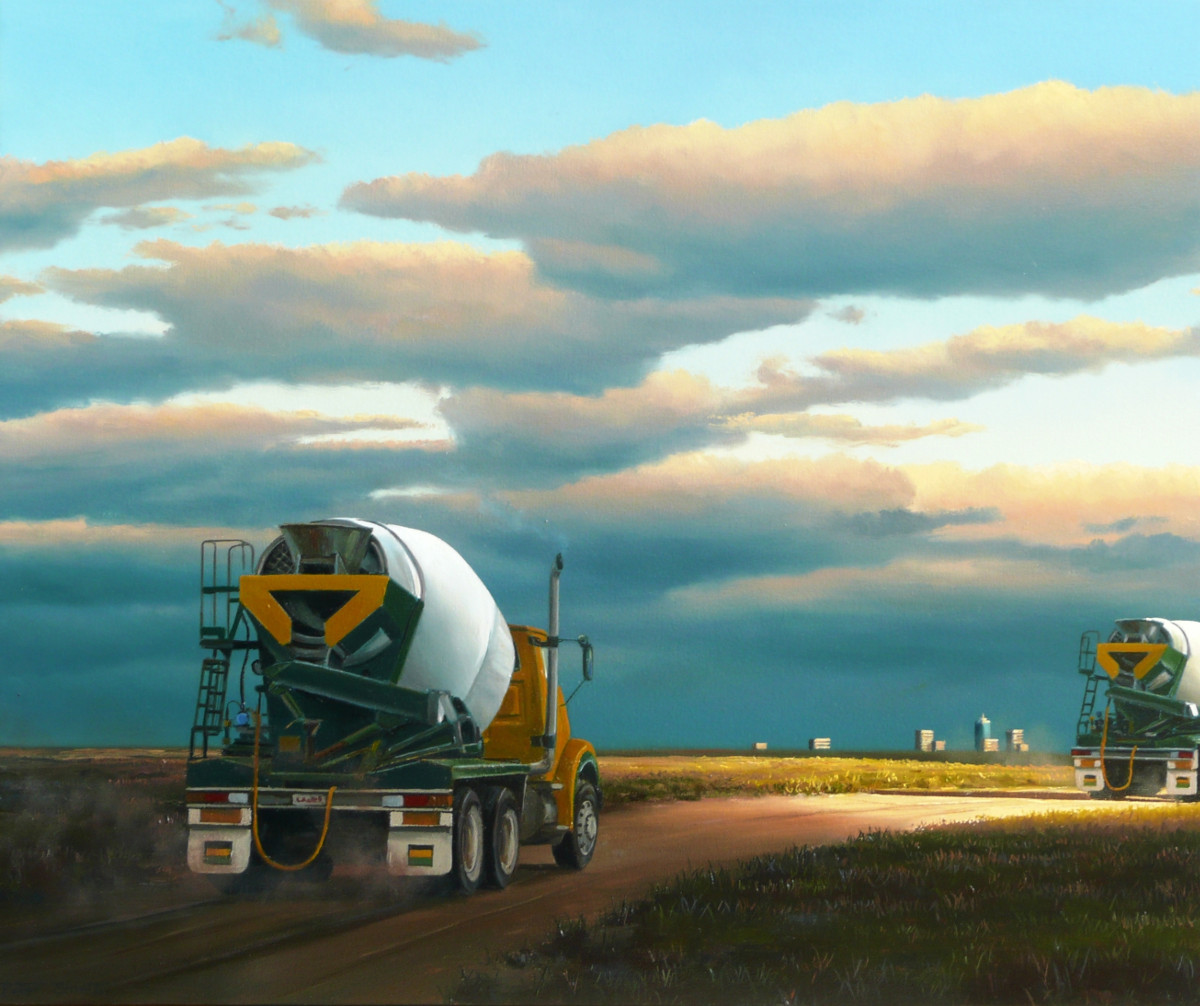 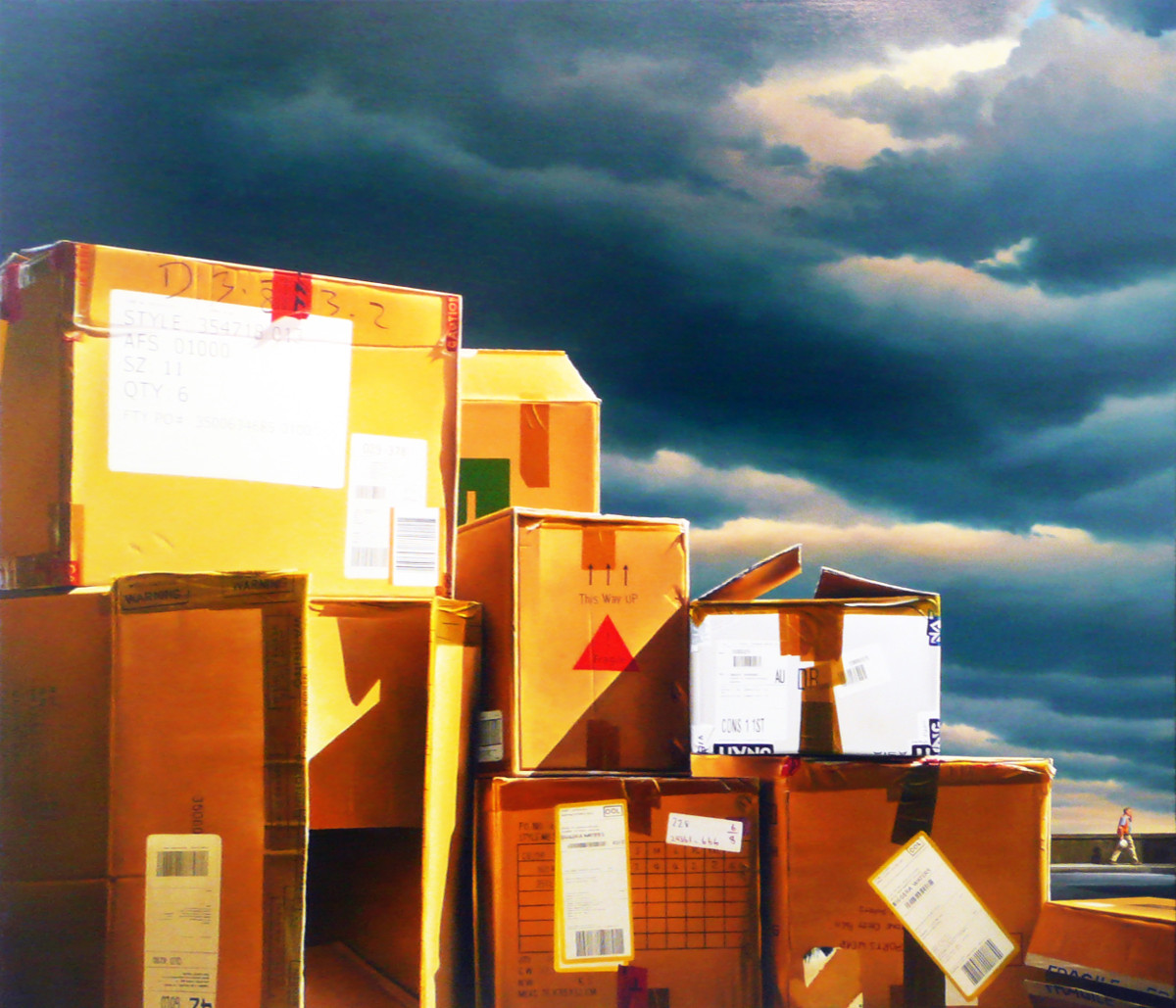 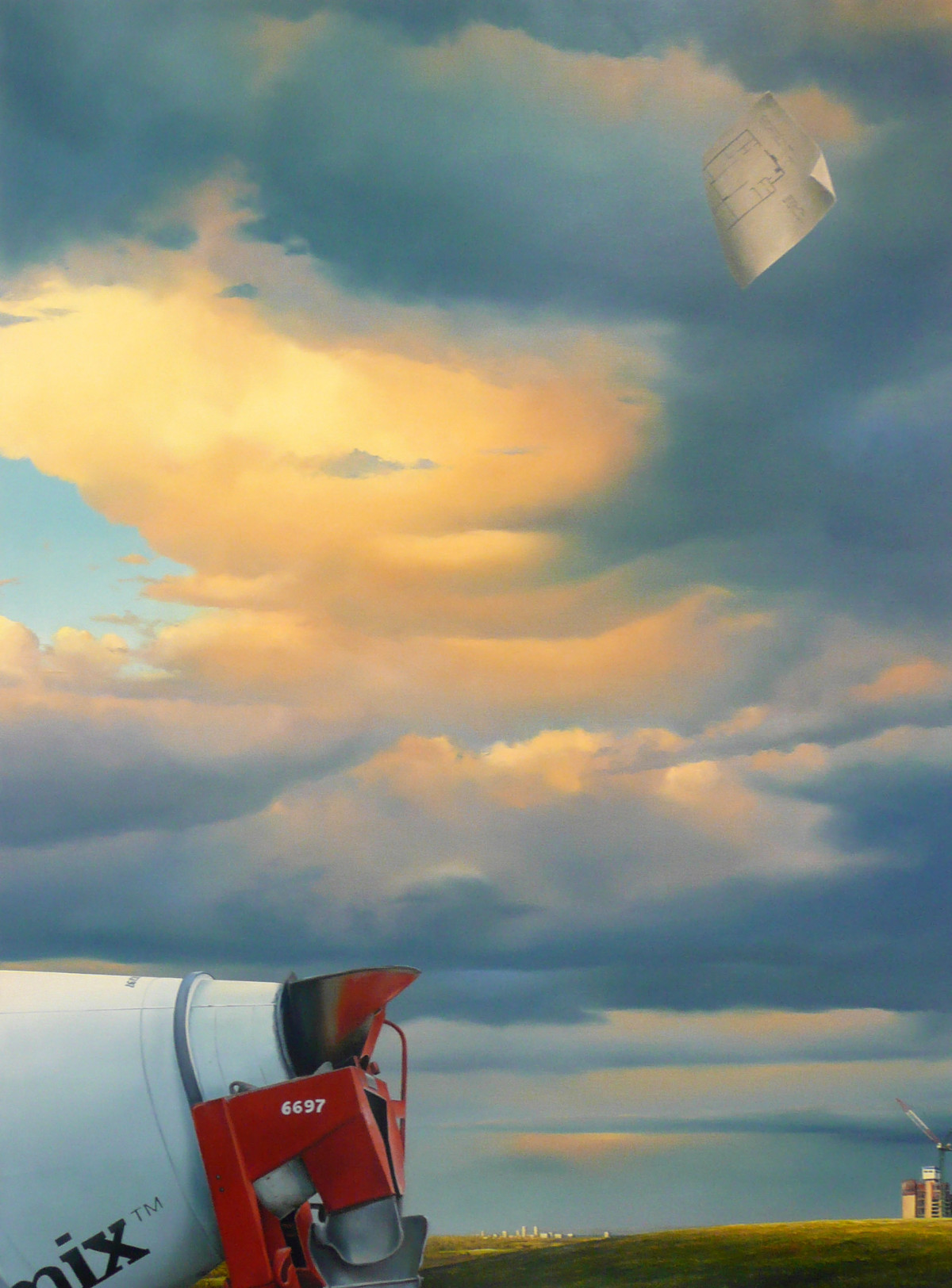 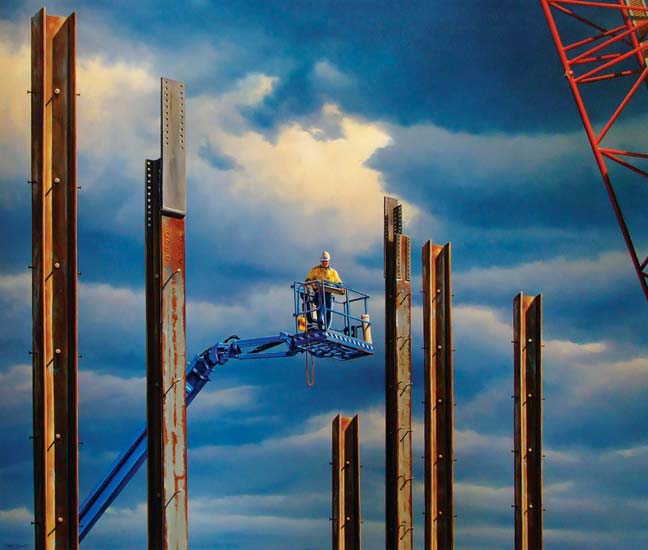 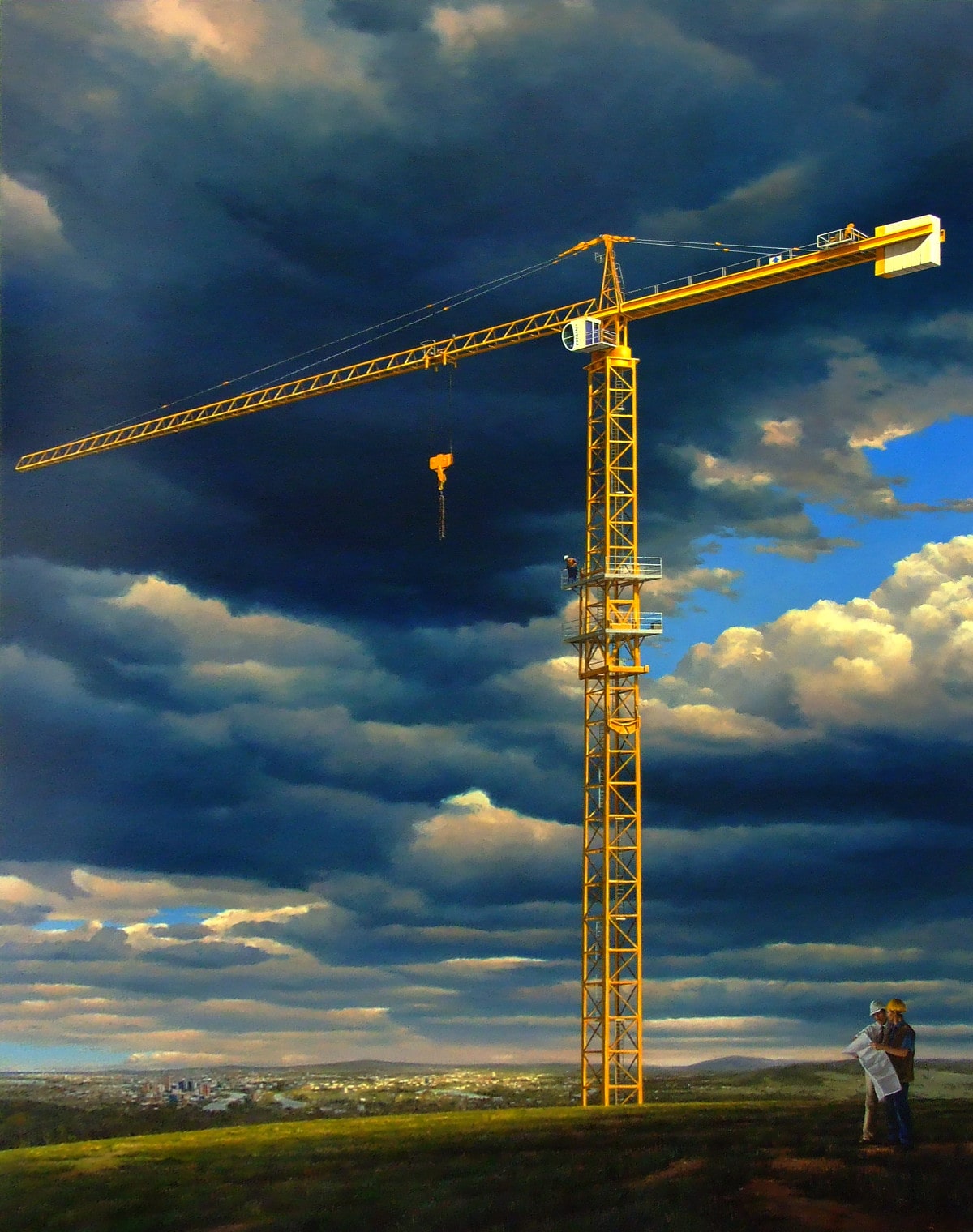 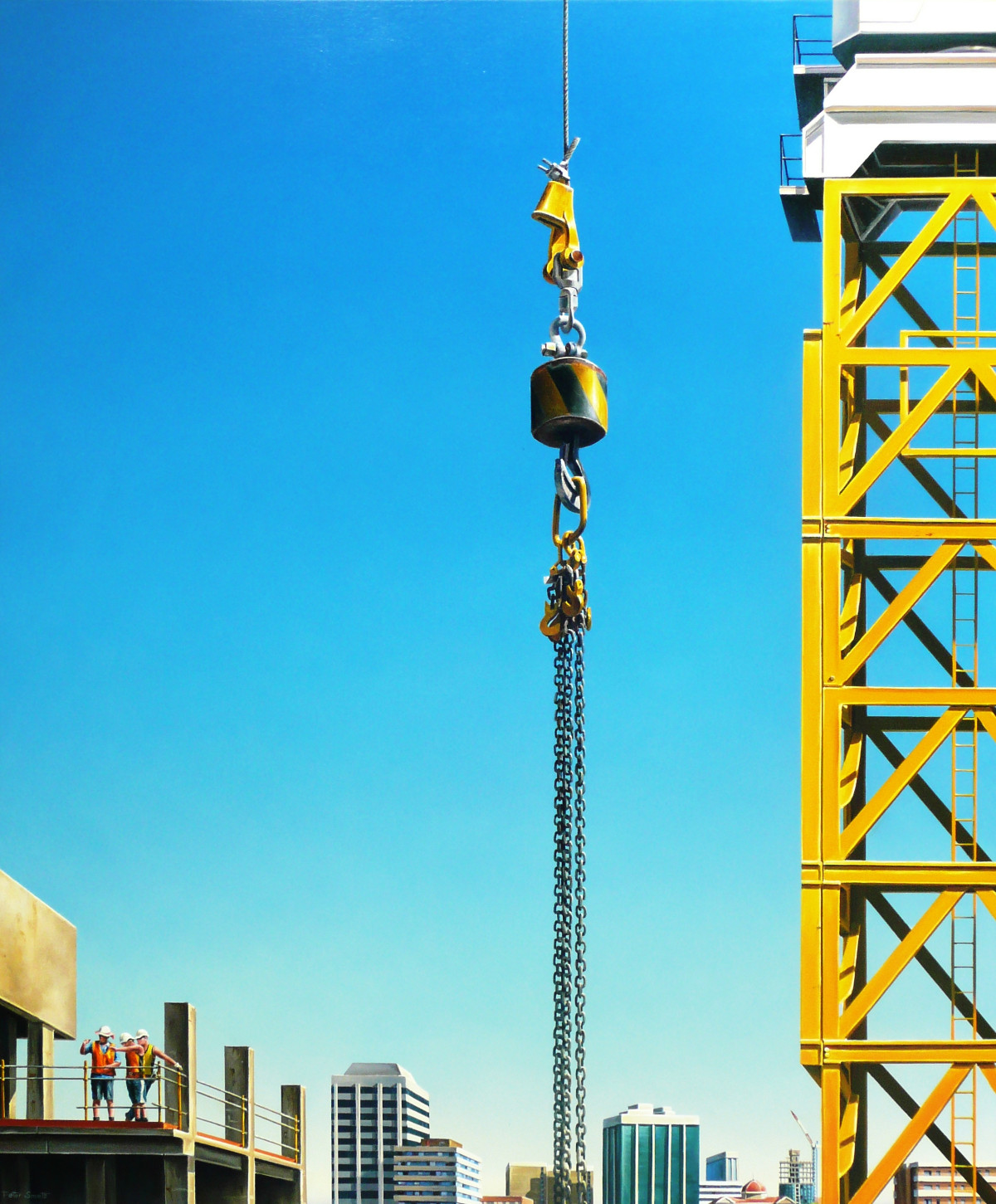